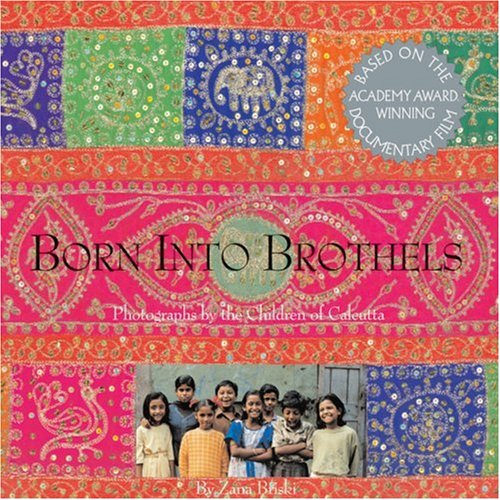 Born into Brothels: Photographs by the Children of Calcutta
by Zana Briski
Publisher's Description
The documentary film 'Born into Brothels,' by Ross Kauffman and Zana Briski, won for Best Documentary at the 77th Academy Awards®. 'Born into Brothels' has won more than 20 film festival awards in 2004, including the Sundance Film Festival Audience Award, Best Documentary at the National Board of Review, and the LA Critics Awards. The Born Into Brothels companion book is a powerful story that unfolds in the red-light district of Calcutta; of a photographer that becomes a teacher, and the extraordinary children she meets who learn to dream with cameras in their hands. In the red-light district over 7,000 women and girls work as prostitutes. Only one group has lower standing: their children. In the face of abject poverty, abuse, and despair, these kids have little possibility of escaping their mother’s fate and creating another kind of life. Briski became involved in the lives of these children seven years ago while she was photographing in the red-light district. Spending time with them, Briski realized that their fascination with her camera could become a creative outlet. She began holding photography workshops to teach the basics of photography, from lighting and composition to editing and narrative sequencing. The results of their work together are documented in this book, which features short biographies of and photographs taken by the children, film stills from the documentary, and commentary by the co-directors Kauffman and Briski. The story they tell is one of the collaborative triumph of self-expression in a complicated reality.
ISBN: 1884167454
Publisher: Umbrage Editions
Hardcover : 104 pages
Language: English
Dimensions: 9.1 x 9.2 x 0.6 inches