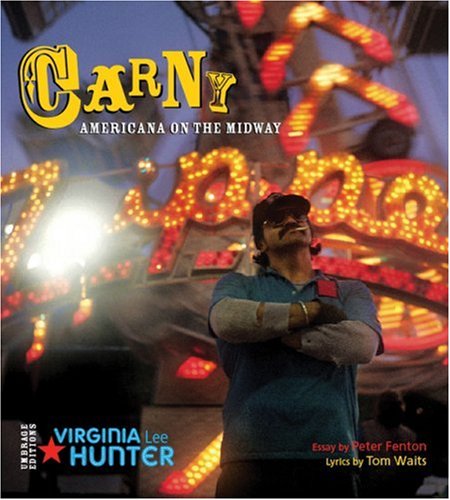 Carny: Americana on the Midway
by Virginia Lee Hunter
Publisher's Description
Virginia Lee Hunter traveled throughout the United States for a decade photographing a slice of Americana, documenting the lives of carnies and carnival-goers alike in a body of work that is part coming-of-age chronicle, part road movie. Capturing colorful images of picaresque county fairs, Carny goes behind the bright lights into the elusive, lurid carnival milieu, sneaking a peak into the tawdry and sometimes menacing world behind the carny’s garish public spaces, while simultaneously illuminating the county fair every American has burned into their childhood memory.

The walk on the wild side brings Hunter in intimate proximity to the ordinary attendees and workers, as well as freaks and lowlifes that populate this world. Accompanying the images are illuminating interviews with carnival families, youths who have traded hometowns for the adventures of the road, and lone men and women seeking a place to hide, yet belong. Peter Fenton, author of Eyeing the Flash: The Education of a Carnival Con Artist, shares an insider’s glimpse into the shadowy world of the carnival. Carny celebrates the midway as a living, breathing entity, both transient creator of nostalgic romance for the towns in which it sets up a temporary fantasy of rides and games, and a space of eternal refuge for those in need of employment, acceptance, or escape. This unique view of an ageless American netherworld shares our nostalgia for its garish tinselly glamour, and savors its atmosphere of outsider surrealism.

The accompanying documentary film Carny will be broadcast in June 2007 on the Sundance Channel in the United States, Channel 4 in the United Kingdom, and TV Ontario in Canada.
ISBN: 1884167667
Publisher: Umbrage Editions
Hardcover : 100 pages
Language: English
Dimensions: 0 x 0 x 0 inches