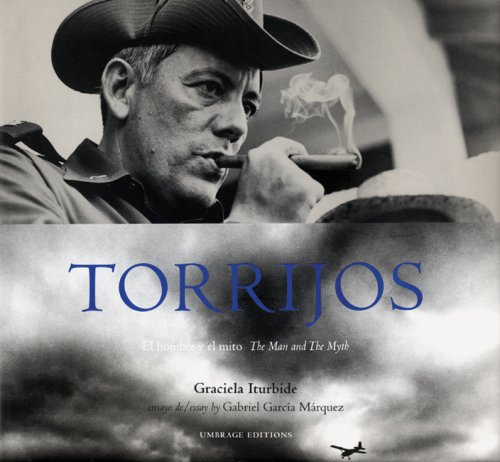 Torrijos: The Man and The Myth (Spanish Edition)
by Graciela Iturbide
Publisher's Description
In the annals of Latin American politics, Omar Torrijos of Panama was a David against Goliath, a charismatic leader who challenged the landed oligarchy and redistributed land and wealth. He died tragically in a 1981 plane crash widely rumored to be the work of the CIA.

This unique, intensely personal homage by two giant talents—the great Mexican photographer Graciela Iturbide and the Nobel Prize-winning Colombian writer Gabriel García Márquez—shows Torrijos as the man behind the story. Never-before-published photographs and never-before-told personal reminiscences offer up candles of memory and understanding and a correction to history. Torrijos’ friend describes a moody, lonely president drinking whiskey all night, and in pre-dawn, summoning one of six different women he knew to keep away the demons. In their eyes, Torrijos is understood not as a dictator who silenced opposition, closed the media, ran up debt, and turned a blind eye to corruption, but as a flawed hero in the footsteps of Simón Bolívar: the first leader to advocate for the poor, yet an innovator in schools and jobs who lured foreign investment to create a regional financial center, and a historical giant whose greatest legacy to his people was the Canal Treaty, signed with President Jimmy Carter in 1977. This is a memoir about a man ahead of his time.
ISBN: 1884167683
Publisher: Umbrage Editions
Hardcover : 112 pages
Language: English
Dimensions: 9.1 x 9.1 x 0 inches