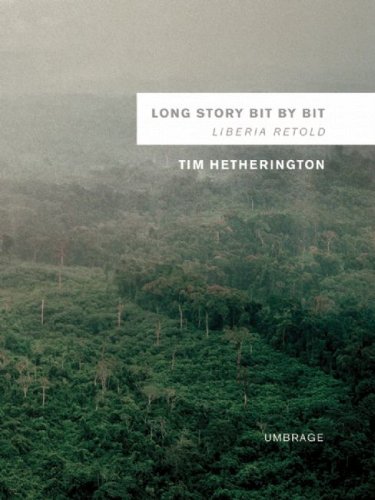 Long Story Bit by Bit: Liberia Retold
by Tim Hetherington
Publisher's Description
Award-winning photographer and filmmaker Tim Hetherington spent eight years living and working in West Africa, with four years spent in Liberia. His book Long Story Bit by Bit entwines documentary photography, oral testimony, and memoir to map the dynamics of power, tragedy, and triumph in Liberia’s recent history. It depicts a past of rebel camps, rainforest destruction, Charles Taylor’s trial as a war criminal, and other happenings contrasted with the hope for the future.

Long Story Bit by Bit brings an extraordinary range of characters to life. Hetherington’s story begins in the rainforest while living with a rebel army during the 2003 battle for Monrovia. During this time he became fascinated by the dynamics of power unraveling in Liberia: from the raw force wielded by young men of rebel groups to the corrupt authority of transitional governments, juxtaposed with the possibilities of a democratically elected president. This book attaches names and faces to the current headlines and provides a background for the present state of Liberia, clarifying the notion that the past decade was not a product of random chaos.
ISBN: 188416773X
Publisher: Umbrage Editions
Hardcover : 193 pages
Language: English
Dimensions: 9.1 x 11.8 x 0.9 inches