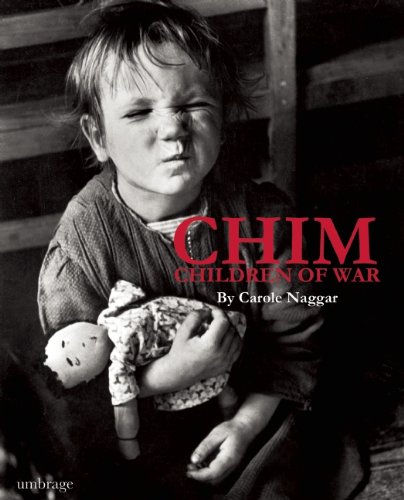 Chim: Children of War
by David Seymour
Publisher's Description
Among the great masters of European photography, CHIM (David Seymour) endures as a legend. Along with Henri Cartier-Bresson, Robert Capa, and George Rodger, he was a co-founder of photojournalism’s famous cooperative, Magnum Photos, and occupies a special place in the canon. Born David Syzmin in Warsaw, Poland, he moved to Paris to study art, and soon gravitated to photography to begin the epic scope of his life’s work—a tableau of haunting social portraits and critiques of the turbulent events of the twentieth century ranging from the Front Populaire to the Spanish Civil War, from the devastating aftermath of World War II to the birth of Israel. Chim was tragically killed by machinegun fire in Suez in 1956.

Chim adopted his Americanized name in 1943 after coming to New York on the eve of World War II. He would be able to return only after the war—to a Europe of devastated landscapes and people. There, his emotional empathy found its chord in the children orphaned and scarred by conflict. The photographs in this retrospective are the result of hundreds of rolls of film Chim shot for UNICEF, the newly formed agency addressing the needs and rights of children, created by the United Nations in response to the human rights crisis the war fomented. By focusing on children, Chim’s photos made many people aware of war’s most vulnerable victims, thereby promoting the cause of peace.

The noted photography historian Carole Naggar (who has authored other works on Chim and on his colleague, Magnum co-founder George Rodger) explored Chim’s long-hidden contact sheets to find unseen images from this important period, during which Chim traveled through some of the countries in Europe the hardest hit: Germany, Austria, Greece, Italy, Hungary, and his native Poland. The images—many shown in this monograph for the first time—reveal Chim’s unique capacity for engaging with his subjects, creating a style of photography that has influenced Magnum photographers and many others. The presentation of this newly excavated and pivotal project in Chim’s oeuvre is in the context of a large retrospective of Chim’s life, mounted in 2013 by the International Center of Photography in New York, the institution that holds the largest archive of his printed pictures.
ISBN: 1884167837
Publisher: Umbrage Editions
Hardcover : 144 pages
Language: English
Dimensions: 8.7 x 10.8 x 0.7 inches