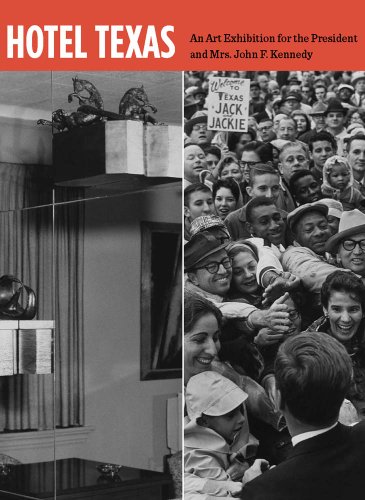 Hotel Texas: An Art Exhibition for the President and Mrs. John F. Kennedy
by Olivier Meslay
Publisher's Description
The events associated with John F. Kennedy’s death are etched into our nation’s memory. This fascinating book tells a less familiar part of the story, about a special art exhibition organized by a group of Fort Worth citizens. On November 21, 1963, the Kennedys arrived in Fort Worth around midnight, making their way to Suite 850 of the Hotel Texas. There, installed in their honor, was an intimate exhibition that included works by Monet, Van Gogh, Marin, Eakins, Feininger, and Picasso. Due to the late hour, it was not until the following morning that the couple viewed the exhibition and phoned one of the principal organizers, Ruth Carter Johnson, to offer thanks. Mrs. Kennedy indicated that she wished she could stay longer to admire the beautiful works. The couple was due to depart for Dallas, and the rest is history.

This volume reunites the works in this exhibition for the first time and features some previously unpublished images of the hotel room. Essays examine this exhibition from several angles: anecdotal, analytical, cultural, and historical, and include discussions of what the local citizens wished to convey to their distinguished viewers.
ISBN: 0300187564
Publisher: Dallas Museum of Art
Hardcover : 112 pages
Language: English
Dimensions: 8.6 x 10.6 x 0.6 inches