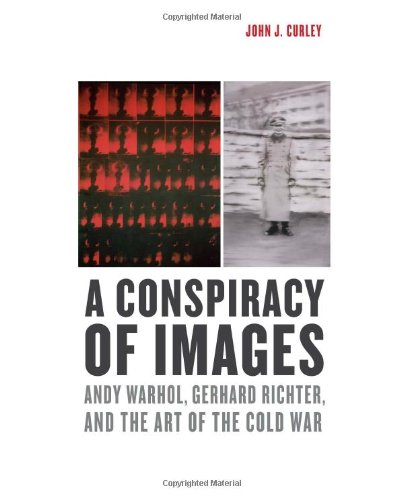 A Conspiracy of Images: Andy Warhol, Gerhard Richter, and the Art of the Cold War
by John J. Curley
Publisher's Description
In October 1962, a set of blurred surveillance photographs brought the world to the brink of nuclear apocalypse during the Cuban missile crisis. The pictures themselves demonstrated little, and explanatory captions were necessary to identify the danger for the public. In the following months, two artists with antithetical backgrounds arrived at a similar aesthetic: Andy Warhol, who began his career as a commercial artist in New York City, turned to the silkscreened replication of violent photographs. Gerhard Richter, who began as a mural painter in socialist Dresden, East Germany, painted blurred versions of personal and media photographs. In A Conspiracy of Images, author John J. Curley explores how the artists' developing aesthetic approaches were informed by the political agency and ambiguity of images produced during the Cold War, particularly those disseminated by the mass media on both sides. As the first scholarly consideration of the visual conditions of the Cold War, A Conspiracy of Images provides a new and compelling transatlantic model for Cold War art history.
ISBN: 0300188439
Publisher: Yale University Press
Hardcover : 296 pages
Language: English
Dimensions: 8 x 10 x 0 inches