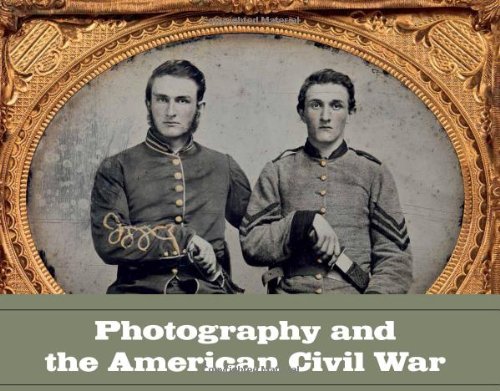 Photography and the American Civil War (Metropolitan Museum of Art)
by Jeff L. Rosenheim
Publisher's Description
Six hundred thousand lives were lost between 1861 and 1865, making the conflict between North and South the nation’s deadliest war. If the “War Between the States” was the test of the young republic’s commitment to its founding precepts, it was also a watershed in photographic history, as the camera recorded the epic, heartbreaking narrative from beginning to end—providing those on the home front, for the first time, with immediate visual access to the horrors of the battlefield.

Photography and the American Civil War features both familiar and rarely seen images that include haunting battlefield landscapes strewn with bodies, studio portraits of armed Confederate and Union soldiers (sometimes in the same family) preparing to meet their destiny, rare multi-panel panoramas of Gettysburg and Richmond, languorous camp scenes showing exhausted troops in repose, diagnostic medical studies of wounded soldiers who survived the war’s last bloody battles, and portraits of both Abraham Lincoln and his assassin, John Wilkes Booth.