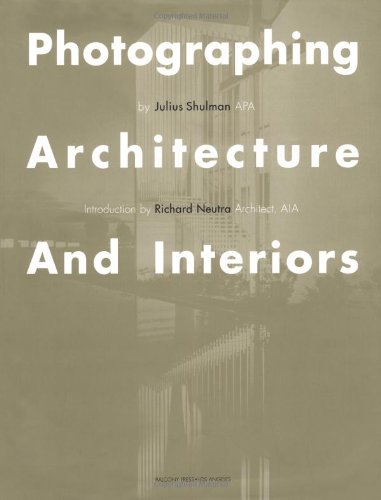 Photographing Architecture and Interiors
by Richard Neutra
Publisher's Description
Originally published in 1962, this was Shulman's first book, and it showcased his now-legendary architectural photographs. This facsimile reproduction, with a new cover and foreword by the master himself, contains a wealth of relevant information for today's photographer of architecture.
Amazon.com Review
The long and illustrious career of architectural photographer Julius Shulman is a case study in how being in the right place at the right time can make one an eyewitness to history. In 1936, Shulman, a young slacker with a fondness for snapping pictures, took a few casual shots of a Los Angeles house that recently had been designed by a young architect whose wife was acquainted with Shulman's sister. The house happened to be the Kun House, and the architect, who liked the shots and commissioned more, happened to be the fledgling Richard Neutra. In short order, Neutra arranged for Shulman to photograph the works of Raphael Soriano, Rudolph Schindler, Gregory Ain, J.R. Davidson, and other colleagues who were pioneering the International style on the West Coast and throughout the U.S. By the 1950s, Shulman was shooting the work of Mies and Wright--by 1962, when Shulman published the first edition of this guide to the craft and business of architectural photography, his work was as inextricably linked with the modern movement in design as was Berenice Abbott's with Paris's Lost Generation.

For both those who are and aren't familiar with Shulman's oeuvre, this delightful updated edition of his stolidly titled Photographing Architecture and Interiorsmakes it completely clear why and how he forged that artistic and professional alliance with the masters of modernism. As a how-to book for both budding and experienced architectural photographers, it's still invaluable. Camera technology and changes in the profession itself might have dated some of the text here, but most of it focuses on principles and techniques that transcend matters of film- or camera-make, and addresses every possible aspect of the craft--from composition, angles, lenses, and lighting (for both exteriors and interiors, which Shulman always saw as contiguous) to shooting with both black-and-white and color film, darkroom manipulation, and special tips for residential, commercial, and landscape work. But, even if the book had no main text, the hundreds of shots of his own work (and their excellent "how I got that shot" captions) would speak and educate for themselves, and are what make this book such a classic for architectural shutterbugs and general lovers of modern architecture alike. It's simply a dramatically arranged and lighted panorama of the boldest design of the postwar era, with a particular emphasis on the glamorous residential projects of a brashly affluent Southern California, where Shulman did most of his work. The book abounds with outdoor and indoor shots of the sleekly linear homes of Soriano, Wright, Thornton Ladd, William Pereira, John Lautner, Cliff May, and many others; all of their drop-dead-cool rec rooms, swimming pools, pavilions and terraces, glass walls, and surrounding hillscapes captured with angles and lighting that compare to Orson Welles or Hitchcock in their drama and intrigue. There's also great representation of Shulman's commercial work here, too--to this day, no one has made such femmes fatales of corporate modernism as the Seagram Building, Lever House, and Pei's Mile-High Center in Denver look as sexy as Shulman did, and his shots of Charles Luckman's high-tech industrial shrines, like General Dynamics Astronautics in San Diego, are a sheer blast from an era that was besotted with the glamour of science, space, and the Bomb. There's a terrific interview with Shulman, up front, and the book concludes with his walk-through case study of the shoot for an entire Bel Air house.

But it's Shulman's decades-long interpretation of the work of his first client, Neutra, that attained a perfection on the level of such other collaborations of the era as Nelson Riddle's Capitol arrangements for Frank Sinatra or Hubert de Givenchy's couture for Audrey Hepburn. Fittingly, in the eloquent introduction that he wrote for this book, Neutra said of an artist of Shulman's rank, "With one gesture, he may evoke untold illusions ... [he] can and does speak to human souls." To wit, this timeless volume opens with those fateful first shots of the Kun House, its gleamingly white and shockingly stark facades staring out over the raw hills of Southern California. No matter that Shulman "snapped" them with his Eastman Vest-Pocket Camera; amid his vertiginous angles and bold chiaroscuro, one senses that something big is about to happen in American architecture. Of course, as we all know now, something did happen--and, as this update of an architectural classic makes clear, no one documented it as lucidly or stylishly as the richly talented Mr. Shulman. --Timothy Murphy