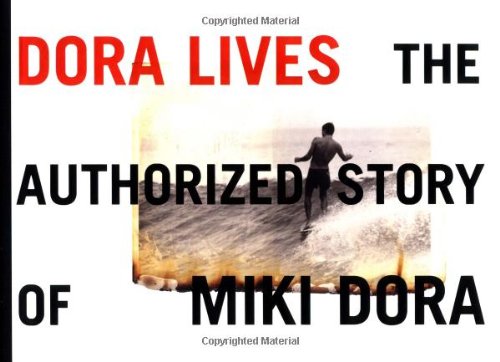 Dora Lives: The Authorized Story Of Miki Dora
by Drew Kampion
Publisher's Description
The surfing iconoclast who became an icon, Miki Dora was the epitome of 60s beach culture. His dark good looks were the envy of Malibu. His talent earned him trophies (which he disdained) and the nickname 'Da Cat.' And in the end, when he didn’t like the commercial direction of the sport he helped define, he turned his back on the beach, wandered the world, served time in jail, and, finally in 2002, suffering from pancreatic cancer returned to his father’s house in Montecito, California to die at age 67. A Malibu graffiti that appeared during his years on the road sums up his role in the surfing imagination and still holds true: 'Dora Lives.' Years in the making and compiled with the cooperation of Dora while he was alive and his family after his death, Dora Lives is the definitive record of the legend. Transcribed interviews with Dora and texts by former Surfer magazine editor Drew Kampion and writer C.R. Stecyk are combined with nearly 100 photos and stills from photographers, filmmakers, and Dora’s personal albums. The story starts out in Budapest, Hungary, where Miklos Dora was born in 1934, follows the child émigré to Hollywood High (except when the surf was up), and finds him at the center of the post-Gidget surf boom of the 60s. At that time, Dora stunt-doubled in a few films and competed when he felt like it, but mostly he embraced the hedonist milieu and burnished his antihero legend, culminating in a mid-wave mooning of the judges at the 1967 Malibu Invitational. Shortly after, he left for points (and point breaks) abroad in France, Indonesia, Australia, and Madagascar until 2001, when he returned to the West Coast to die.
ISBN: 1890481173
Publisher: D.A.P./T.Adler Books
Hardcover : 142 pages
Language: English
Dimensions: 0 x 0 x 0 inches