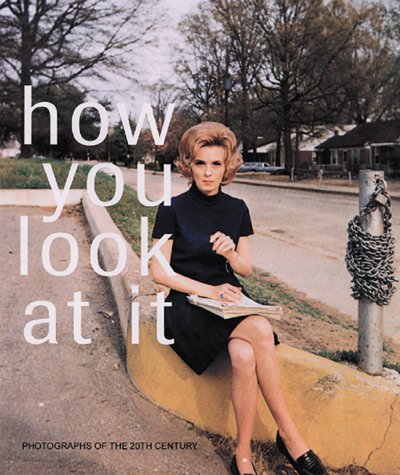 How You Look At It: Photographs of the 20th Century
by Heinz Liesbrock
Publisher's Description
Intelligently edited, carefully sequenced, and superbly printed--How You Look At It makes the convincing argument that photography is the definitive art form of the 20th century. The images here are arranged thematically bringing out connections between artists working throughout the century, ignoring conventional chronological treatment. What emerges is a wonderful story of artists struggling with and reinventing the visual language they employ. A truly wonderful edition!
Amazon.com Review
How You Look at It is the catalog of a major photographic exhibition organized by the Sprengel Museum in Hanover, Germany. Its thesis--that photography is the defining art of the 20th century--is straightforward, but its organization is unusual. Rather than a chronological survey of iconic images, the book presents only 40 photographers, from the pioneering Frenchman Atget to postwar Americans and modern German masters like Thomas Struth and Andreas Gursky. This enables the chosen artists to be shown in depth, though the criteria for their being chosen are not clear to this reviewer. Exposure to European material will benefit the American audience to whom this English-language edition of the book is directed, but it is unfortunate that, apart from Tomatsu Shomei, no non-Western photographer is included. Just as it took Robert Frank, a Swiss, to shock the art establishment in 1959 with the raw images of his collection The Americans, Americans today can learn from the formal explorations of their transatlantic counterparts. Examples of non-photographic artworks are sprinkled through the book--a Picasso portrait, for example, or a David Hockney cityscape--giving context to the photographs. The thoughtful text consists of essays by the two curators of the show and three other critics who analyze the current theoretical underpinnings of photography. This is not easy reading; the translations successfully preserve the denseness of the original German. The 500 images, however, speak for themselves, making How You Look at It valuable material for anyone interested in photography and its relations to contemporary cultural issues. --John Stevenson
ISBN: 1891024213
Publisher: Distributed Art Publishers
Hardcover : 544 pages
Language: English