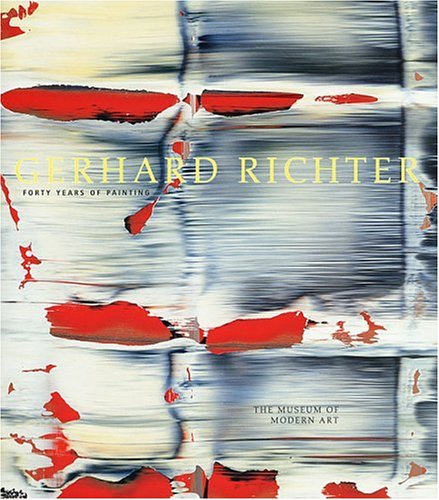 Gerhard Richter: Forty Years Of Painting
by Robert Storr
Amazon.com Review
The beautiful catalog Gerhard Richter: Forty Years of Painting accompanies the Museum of Modern Art's retrospective of this prolific and important German artist. Richter's many artistic achievements vacillate between pure abstraction and a kind of realism. His realistic paintings, based primarily on personal photographs and images from newspapers, range in subject matter from the banal, like rolls of toilet paper, to the extremely potent, such as famous Nazi "doctor" Werner Hyde. The paintings have in common an emotional remove; the re-creating of photographic images points us toward our own possible emotional detachment to the influx of images in the world. A blurred chair, Jackie Kennedy, burning candles, family portraits--Richter lays them all out before us as if to say, Here, they are all the same. The insightful text by MoMA curator Robert Storr provides an in-depth look at Richter's life in postwar Germany, tracing the influences and environment that made his work possible. The book includes a revealing interview with the artist and a detailed chronology of his life and work, plus 138 color illustrations and 165 duotones. --J.P. Cohen
Publisher's Description
Gerhard Richter: Forty Years of Painting
Edited and with an essay by Robert Storr.

Ranging from photo-based pictures to gestural abstraction, Gerhard Richter's diverse body of work calls into question many widely held attitudes about the inherent importance of stylistic consistency, the 'natural' evolution of individual artistic sensibility, the spontaneous component of creativity, and the relationship of technological means and mass media imagery to traditional studio methods and formats. Unlike many of his peers, he has explored these issues through the medium of painting, challenging it to meet the demands posed by new forms of conceptual art. In every level of his varied output from his austere photo-based realism of the early 6os, to his brightly colored gestural abstractions of the early 8os, to his startling cycle of black-and-white paintings of the Baader-Meinhof group-Richter has assumed a critical distance from vanguardists and conservatives alike regarding what painting should be. The result has been among the most convincing renewal of painting's vitality to be found in late loth- and early 21st-century art. With an extensive and insightful critical essay by curator Robert Storr, a recent interview with the artist, a chronology, an exhibition history, and nearly 300 color and duotone reproductions, Gerhard Richter: Forty Years of Painting marks a significant contribution to the understanding of contemporary art in general, and Gerhard Richter in particular.

Born in 1932 in Dresden, Germany, Gerhard Richter grew up under National Socialism and lived for 16 years under East German Communism before moving to West Germany in 1961. In the heady artistic milieu of Cologne and Dusseldorf in the 1960s Richter discovered Art Informel, Neo-Dada, and Fluxus, and, together with Sigmar Polke and Konrad Lueg, briefly formed a satirical variant of Pop called 'Capitalist Realism.' Since then, he has emerged as one of the essential painters of the postwar period, pioneering realism with paintings made from photographs. His work has also profoundly engaged with Neo- Expressionism and Abstract Art.

Robert Storr is the Senior Curator of Painting and Sculpture at The Museum of Modern Art, New York. He has published monographs on Philip Guston, Robert Ryman and Raymond Pettibon, and has been a contributing editor at Art in America since 1981. He is also the author of Gerhard Richter: October 18, 1977.
ISBN: 189102437X
Publisher: The Museum of Modern Art, New York
Hardcover : 336 pages
Language: English
Dimensions: 10.2 x 12 x 0 inches