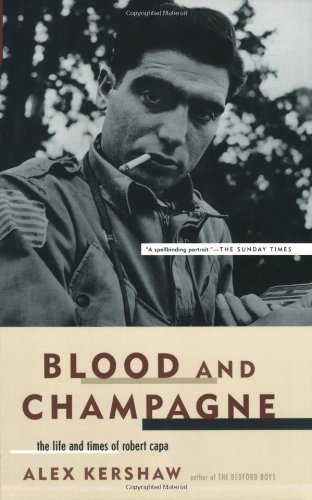 Blood And Champagne: The Life And Times Of Robert Capa
by Alex Kershaw
Publisher's Description
Robert Capa, one of the finest photojournalists and combat photographers of the twentieth century, covered every major conflict from the Spanish Civil War to the early conflict in Vietnam. Always close to the action, he created some of the most enduring images ever made with a camera-perhaps none more memorable than the gritty photos taken on the morning of D-Day.But the drama of Capa's life wasn't limited to one side of the lens. Born in Budapest as Andre Freidman, Capa fled political repression and anti-Semitism as a teenager by escaping to Berlin, where he first picked up a Leica camera. He founded Magnum, which today remains the most prestigious photographic agency of its kind. He was a gambler and seducer of several of his era's most alluring icons, including Ingrid Bergman, and his friends included Irwin Shaw, John Steinbeck, Ernest Hemingway, and John Huston.From Budapest in the twenties to Paris in the thirties, from postwar Hollywood to Stalin's Russia, from New York to Indochina, 'Blood and Champagne' is a wonderfully evocative account of Capa's life and times.
ISBN: 0306813564
Publisher: Da Capo Press
Paperback : 336 pages
Language: English
Dimensions: 6.1 x 8.8 x 0.9 inches