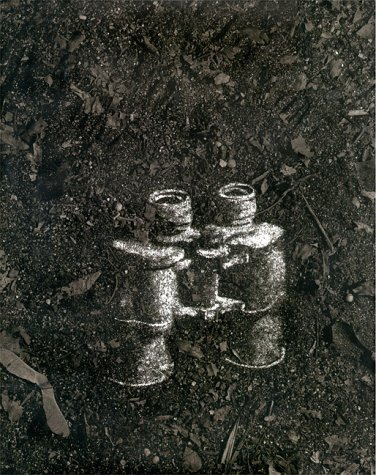 Seeing Is Believing (an exhibition catalogue / monograph)
by Vik Muniz
Publisher's Description
Riding a recent wave of international exhibitions, culminating in the ICP's show Seeing is Believing, Vik Muniz's subtly humorous photographs are never quite what they seem. Muniz manipulates the surface of his photographs with such bizarre treatments as sugar, soil, and chocolate syrup--and then rephotographs them. The resulting images insightfully play with notion of any visual qualities being inherently photographic.
Amazon.com Review
Best described as an artist who uses a camera, Vik Muniz blurs the lines between painting, sculpture, and photography. He has made a number of different series of photographs in which he constructs images--often portraits--out of materials such as sugar, chocolate syrup, and thread. In another series, he drew famous images (using his aforementioned nontraditional media), like the photograph of Neil Armstrong on the moon, from memory. Muniz plays freely in the field of representation. And through his work, viewers witness the complicated separation between a real image that seems definitely to exist somewhere, and the means by which Muniz achieves a representation of that image--first re-creating it, then making a photograph. He writes that "illusion becomes a way to improve our understanding of what reality is and humor becomes a subject for serious investigation." By setting up images that aim to unsettle viewers' perceptual faculties as a way of expanding understanding, and stimulating discovery, Muniz takes part in a trend in image-making that includes artists such as Gerhard Richter, Richard Artschwager, and Thomas Demand.

Published alongside his solo exhibition at the International Center of Photography in New York, Seeing Is Believing is the first monograph on Vik Muniz. The reproduction of the images on heavy, creamy paper is of exceptional quality, indicative of its publisher, Arena Editions. And the book includes two essays, one by Charles Ashley Stainback and the other by Mark Alice Durant, as well as a dialogue between Muniz and Stainback. --Loren E. Baldwin