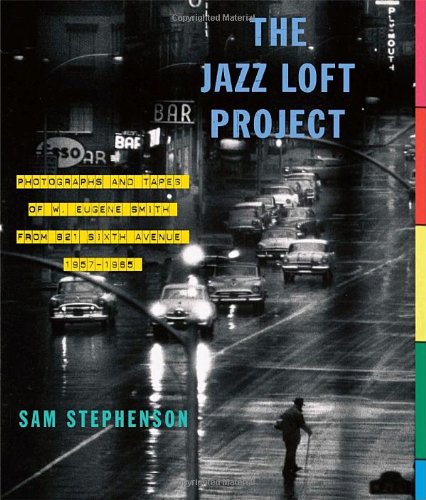 The Jazz Loft Project: Photographs and Tapes of W. Eugene Smith from 821 Sixth Avenue, 1957-1965
by Sam Stephenson
Publisher's Description
Publisher Marketing In 1957, Eugene Smith, a thirty-eight-year-old magazine photographer, walked out of his comfortable settled world-his longtime well-paying job at' Life' and the home he shared with his wife and four children in Croton-on-Hudson, New York-to move into a dilapidated, five-story loft building at 821 Sixth Avenue (between Twenty-eighth and Twenty-ninth streets) in New York City's wholesale flower district. Smith was trying to complete the most ambitious project of his life, a massive photo-essay on the city of Pittsburgh. 821 Sixth Avenue was a late-night haunt of musicians, including some of the biggest names in jazz-Charles Mingus, Zoot Sims, Bill Evans, and Thelonious Monk among them-and countless fascinating, underground characters. As his ambitions broke down for his quixotic Pittsburgh opus, Smith found solace in the chaotic, somnambulistic world of the loft and its artists. He turned his documentary impulses away from Pittsburgh and toward his offbeat new surroundings. From 1957 to 1965, Smith exposed 1,447 rolls of film at his loft, making roughly 40,000 pictures, the largest body of work in his career, photographing the nocturnal jazz scene as well as life on the streets of the flower district, as seen from his fourth-floor window. He wired the building like a surreptitious recording studio and made 1,740 reels (4,000 hours) of stereo and mono audiotapes, capturing more than 300 musicians, among them Roy Haynes, Sonny Rollins, Bill Evans, Roland Kirk, Alice Coltrane, Don Cherry, and Paul Bley. He recorded, as well, legends such as pianists Eddie Costa, and Sonny Clark, drummers Ronnie Free and Edgar Bateman, saxophonist Lin Halliday, bassist Henry Grimes, and multi-instrumentalist Eddie Listengart. Also dropping in on the nighttime scene were the likes of Doris Duke, Norman Mailer, Diane Arbus, Robert Frank, Henri Cartier-Bresson, and Salvador Dali, as well as pimps, prostitutes, drug addicts, thieves, photography students, local cops, building inspectors, marijuana dealers, and others. Sam Stephenson discovered Smith's jazz loft photographs and tapes eleven years ago and has spent the last seven years cataloging, archiving, selecting, and editing Smith's materials for this book, as well as writing its introduction and the text interwoven throughout. W. Eugene Smith's Jazz Loft Project has been legendary in the worlds of art, photography, and music for more than forty years, but until the publication of 'The Jazz Loft Project,' no one had seen Smith's extraordinary photographs or read any of the firsthand accounts of those who were there and lived to tell the tale(s) . . .
Amazon.com Review
Amazon Best Books of the Month, December 2009: Like the American Renaissance of Emerson, Hawthorne, Dickinson, Thoreau, and Melville bursting out of the Massachusetts countryside a hundred years before, the legend of the New York jazz scene in the late 1950s and early '60s, when singular geniuses like Monk, Coltrane, Davis, Mingus, and Evans might be gigging on the same night--sometimes on the same stage--only grows with time. Now, in The Jazz Loft Project, we have a rare and remarkable window into that moment. The project is the fruit of two obsessed men, W. Eugene Smith, the brilliant photographer who shot thousands of pictures and recorded thousands of hours of music and talk at his Midtown apartment and studio, which served as an open-door meeting place and jam session site for hundreds of musicians and artists; and Sam Stephenson, the documentarian who has spent even longer archiving and investigating the riches Smith left behind. Among its many wonders, what their book does best is put the creations of those bebop geniuses in context: giving life to the forgotten players who jammed with the future immortals, revealing the casual crosspollination among artists, musicians, and writers (and between blacks and whites), and reminding us of the world outside the loft, with baseball, UFO stories, and civil rights on the radio and the daily commerce of New York's flower district on the street below. --Tom Nissley
Look Inside The Jazz Loft Project Click on thumbnails for larger images