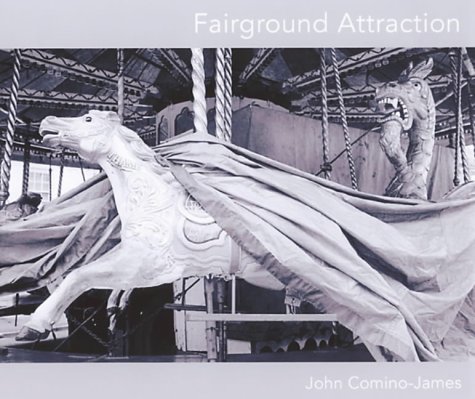 Fairground Attraction
by John Comino-James
Publisher's Description
Every week between Easter and November around two hundred funfairs open in cities and towns across every part of the UK. Some 4500 Travelling Showmen and their families run them – an extraordinary group of people who make up what has been described as the largest extended village in the country.

Most of us never encounter showmen directly: often wrongly confused with other travellers and frequently seen as outsiders they have their own strong cultural identity. The fairground itself may be transient and its modern equipment may employ the most up to date electronic and mechanical technology, but the Showmen’s community is deeply rooted in historical tradition and strong family values.

John Comino-James's work approaches the intimacy of a family album. Through formal portraits and candid observation we meet showmen not only at work – as they build up and open a Fair in the streets of an English Market Town – but also away from the brash and public arena of the funfair in the private spaces of their living trailers and winter-quarters and during their family celebrations of christening and marriage.

With texts written from conversations with the showmen and a contextualising essay by the photographer, Fairground Attraction offers a unique insight into the fascinating community and way of life of the Travelling Showmen.

Born in Somerset, John Comino-James now lives near Thame in Oxfordshire. His first book Nearly Every Tuesday, which documented a weekly street market, was published in 1994 to great acclaim, and his photographs have been exhibited widely in the UK.
ISBN: 1899235744
Publisher: Dewi Lewis Publishing
Hardcover : 168 pages
Language: English
Dimensions: 0 x 0 x 0 inches