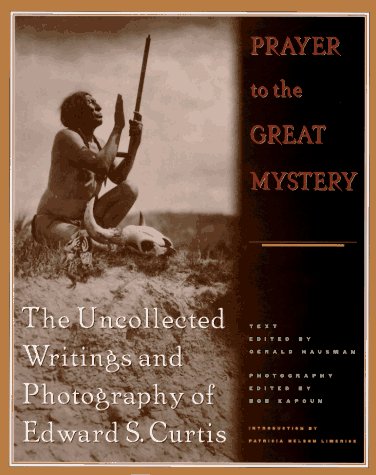 Prayer to the Great Mystery: The Uncollected Writings and Photography of Edward S. Curtis
by Gerald Hausman
Publisher's Description
Amazon.com Review
Edward S. Curtis was obsessed with recording information about Native Americans: he believed their culture might simply disappear without a trace. More than 100 years ago, he took his first photographs of Native Americans, and for decades he traveled extensively, snapping pictures and taking copious notes on their ways of life. Prayer to the Great Mystery contains dozens of Curtis's photos that were discovered in the files of the Library of Congress, as well as many previously known prints, some of which are considered masterpieces of photographic art. The text, taken from Curtis's voluminous writings on Native Americans provides priceless accounts of how they lived on the Great Plains, in the Southwest, and in the Pacific Northwest.
ISBN: 0312135912
Publisher: St Martins Press
Hardcover : 245 pages
Language: English