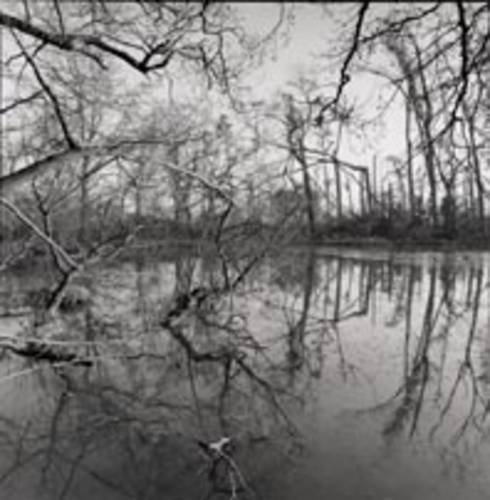 Crossing the Water
by Nicholas Sinclair
Publisher's Description
'I began to see the lake as a vast human body, laid flat, and myself as an acupuncturist sensing the meridian points.'

The series of exquisite black and white photographs that make up Nicholas Sinclair's 'Crossing the Water' are a meditation on the changing atmospheres of one rural site, a lake in East Sussex, that Sinclair has visited since childhood and that continues to hold a sense of mystery and unresolved fascination for him. The photographs were taken as he returned to the place over several years, through different times of the day; the lake and its dense surrounding vegetation transformed by patterns of growth and decay and by changing light and weather conditions.

As Professor David Alan Mellor says in his introduction to the book: 'In Sinclair's photographs the tree spirits latent gather, in a scarcely heard murmur, to twist and animate the chilled air around the lake.' The work's pensive, analytical tone is undercut by other references to the fantastic and the gothic, a 'terrain co-ordinated by the images and strategies of artists as diverse as Rudolph Bresdin, Edgar Allan Poe, Robert Smithson, Matt Collishaw, Whistler and Tennyson.'

As well as Professor Mellor's essay the book includes a text by Ian Jeffrey, also one of Britain's leading writers on photography. The book will be printed by BAS, winner of the award for 'Fine Art Printer of the Year' in 2000, with Nicholas Sinclair's previous book, Portraits of Artists, as one of their entries. Nicholas Sinclair is known principally as a portrait photographer and, since the mid-1980s, his work has been extensively exhibited and published in Britain, Europe and the USA. His two monographs, The Chameleon Body (1996) and Portraits of Artists (2000) were published by Lund Humphries.
ISBN: 1903796024
Publisher: Photoworks
Hardcover : 64 pages
Language: English