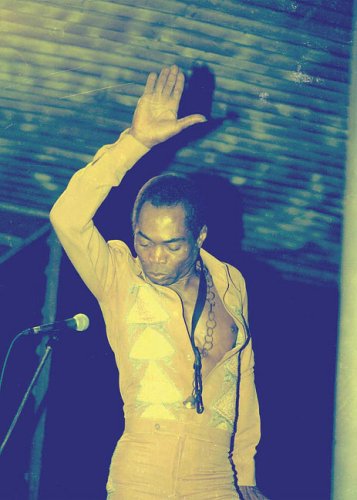 Femi Bankole Osunla: My Black President
by Femi Bankole Osunla
Publisher's Description
The Nigerian photographer Femi Bankole Osunla was part of the inner circle of Fela Anikulapo-Kuti, the ground-breaking Lagos singer and political activist, from the early 1970s to his death (of AIDS) in 1997. In My Black President, Osunla photographs the Afrika Shrine, Fela’s personal club, and inside the Kalakuta Republic, the residential compound in Lagos that the performer declared a separate country within the politically corrupt Nigeria, and where he lived with an ever-shifting entourage of friends, musicians, and wives. To some observers Kalakuta was a glorified drug den and harem, but Osunla calls it 'an institution of higher learning.' And while the photographer was there to document the aftermath of the brutal police raid on the compound in 1977, he also managed to preserve precious moments. Fela’s mother, a well-known political activist in Nigeria, died from injuries suffered in the 1977 attack: A picture of Fela leaning solicitously over her as she sits on a hotel bed captures the tender side of a notoriously mercurial man.

Osunla has compiled a portfolio of more than 15,000 images of the life and times of Fela, earning himself the nickname Femi Foto. He points to his missing bottom teeth, the small bump on his forehead, the thin scars that mark his face. Standing on the front lines with Fela in a lifelong battle with oppressive Nigerian regimes was 'not an easy task,' Osunla said, 'but I believed in what he was doing. I took the pain, the police brutality, the soldier brutality, because I wanted the future generation to see that Fela was a great man.'
ISBN: 1904563236
Publisher: Trolley
Hardcover : 196 pages
Language: English