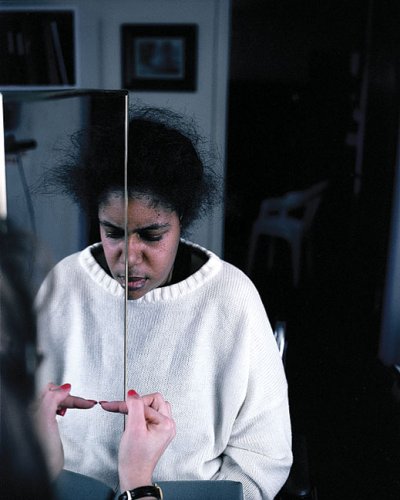 The Burden of Memory
by Carl De Keyzer
Publisher's Description
In 1997 the photographer John Trotter, on assignment in Sacramento, California, was beaten and left for dead by members of a drug-dealing street gang. He suffered a traumatic brain injury, and spent months recuperating in Slerra Gates, a rehabilitation facility, where among other things, he would have to re-learn how to remember. Trotter hesitantly picked up a camera again after he had left the clinic, mostly as therapy, and began a vivid and vital record of his life there among the brain-injured. In so doing he had to teach himself from the start how to use a camera. Being John Trotter is his testament to that time. His photographs are intelligent, lucid and heartbreaking, even though he himself had suffered the most horrendous invasion of his comprehension by bloodstained sneakers stamping on his head. Here are the cold realities and humbled hopes of men and women faced with uncertain futures, stripped of many of the vital qualities that once defined who they were. It is also a testament to those faced with caring for these once-independent adults. Trotter has photographed his story in colour, producing images that invite the viewer to render the hues into a sensibility of the world of injured minds.
ISBN: 1904563260
Publisher: Trolley
Hardcover : 196 pages
Language: English
Dimensions: 0 x 0 x 0 inches