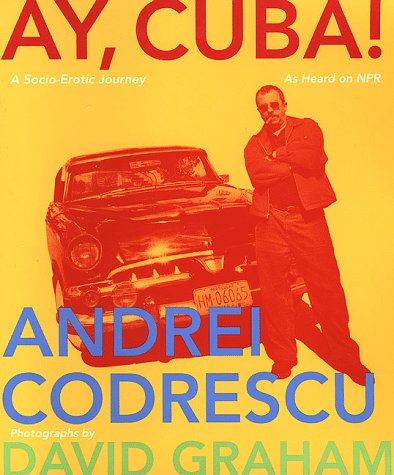 Ay, Cuba! A Socio-Erotic Journey
by David Graham
Publisher's Description
Amazon.com Review
When Romanian exile and National Public Radio commentator Andrei Codrescu was given an assignment by his producer to travel to Cuba just before the pope's historic visit in 1998, he jumped at the chance. Cuba had been on his mind for years as part of his pursuit to understand the mysterious demise of Communism in Eastern Europe. Castro's Cuba, he felt, was the only place that held the clues to this demise; it was a "laboratory of pre-post-communism" where he could witness "a decomposing ideology before all its elements transmuted into the noxious gases that gag Eastern Europe now."

Together with documentary photographer David Graham, Codrescu went on a 13-day journey, and he encountered warm, affectionate, hospitable people. What surprised Codrescu and Graham most about the Cubans was their candor: They spoke of their nation with a mix of pride, hopelessness, and amusement--a major contrast to Codrescu's experience in post-Communist Romania back in 1989. The two met and interviewed a broad range of artists, architects, prostitutes, and members of the working class. They also met some international celebrities, such as baseball player and recent defector El Duque Hérnandez.

Codrescu's lively, at times irreverent and comical narration and Graham's expressive photos evoke the passion, culture, economics, and politics that shape the nation. Ay, Cuba! is an enlightening and important book, made more urgent by Codrescu's indelible and fully realized portrait of the twilight of Fidel Castro's 40-year reign, one that shatters the politically constructed, media-perpetuated American myths so carefully ingrained in our conscience since the cold war. --Kera Bolonik