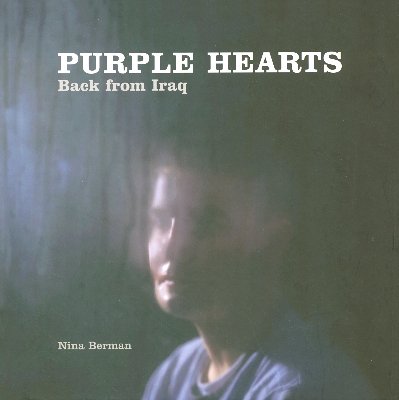 Purple Hearts: Back from Iraq
by Nina Berman
Publisher's Description
FEW COPIES SIGNED by Nina Berman. A Purple Heart is the token honor given to soldiers for their wounds. It makes them heroes. It is the title that Nina Berman has given to her photographs of American soldiers gravely wounded in the Iraq war, who have returned home to face life away from the waving flags and heroic send-offs. The images are accompanied by first-person interviews with the soldiers, who discuss their lives, reasons for enlisting, and experience in Iraq. They provide a glimpse into the myths of warfare as glorious spectacle through the minds of young men desperate to believe in the righteousness of their actions. One soldier explains that he always wanted to be a hero. He thought the military would be fun-he would jump out of planes. He never imagined it could be ugly until he saw Saving Private Ryan. He is now a cripple, doped up all day on pain medications, flat broke, with one kid and another on the way. Another soldier describes how he called a recruiting station after watching an MTV-style commercial for the Army on TV. An immigrant from Pakistan, he was given his citizenship following his injury. It's a fair trade in his mind: a leg for an American passport. Berman's photographs are accompanied by essays from Verlyn Klinkenborg, a New York Times editorial page writer, and Tim Origer, a Vietnam veteran and former Marine who fought in the Tet offensive and returned at age 19, an amputee. For more information go to www.purpleheartsbook.com.
ISBN: 1904563341
Publisher: Trolley Books
Hardcover : 96 pages
Language: English
Dimensions: 0 x 0 x 0 inches