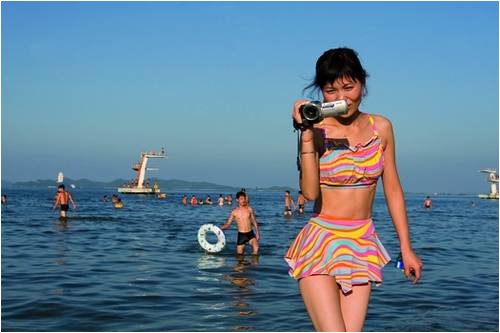 For decades North Korea, or the Democratic People's Republic of Korea (DPRK), has been a country shrouded in secrecy from the outside world. Little is seen of the totalitarian regime of Kim Jong-il, son of the great leader Kimm Il-sung, or the people of one of the few Communist-ruled countries in the world. As a clandestine nation with nuclear ambitions, North Korea was only recently taken of the U.S. list of states that sponsor terrorism while international NGOs count human rights in North Korea as some of the worst in the world, with severe restriction on their political and economic freedoms. Freedom of the press is non-existent. Photographer Irina Kalashnikova and Glyn Ford, a British member of European Parliament, visited North Korea in August 2008. Camera and visitors are tightly regulated, yet they managed to bring back unique images of a population that were often far removed from our Western preconceptions. Beaches and mud baths, hairdressers and hospitals, farms and karaoke bars, these are just some of the p;aces where we see the North Koreans - as we have never seen them before. These images feature alongside more familiar scenes of North Korea, and the most famous spectacle of all, the Pyongyang Arirang mass games, where thousands perform disciplined acrobatics and record-breaking formations in dazzling displays. A fascinating and candid view of the people of this little seen and understood country - at work, at play, their daily lives played out in a unique collection of photographs, revelling in the misnomers of what we imagine life there is really like.
ISBN: 1904563392
Publisher: Trolley
Hardcover : 240 pages
Language: English
Dimensions: 0 x 0 x 0 inches