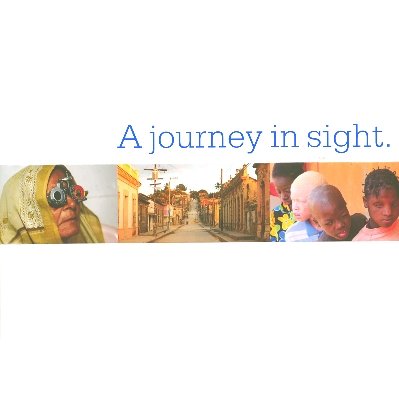 A Journey In Sight
by Jarret Schecter
Publisher's Description
Visiting Burkina Faso, one of the world's poorest countries, I sensed that there was a disproportionate number of people deprived of sight. Back in the United States, in February 2002, I discovered that 8 out 10 blind people live in the developing world. Astounding as this statistic is, I was even more surprise to learn that the vast majority of blindness in the world is preventable. Incredibly, most preventable blindness is cured through inexpensive procedures, that literally last minutes. Like many residual problems of poverty that are endemic to the developing world, people in the developed world do not make an intuitive link between blindness and poverty. The association is not made and the magnitude of the problem is even much less understood. Approximately, 80% of the world's 50 million blind people are blind because they were born in the wrong place. They are blind due to the residual effects of poverty: vitamin A deficiency, unsanitary conditions, minimal healthcare, and other issues. At the moment, in the world, 40 million people suffer from preventable blindness and around 125 million can barely see due to impoverished conditions. Although the developed world has done relatively little thus far, there are fortunately certain international organizations that are declaring war on preventable blindness. Organizations such as Orbis provide free or inexpensive eye treatment to people who needlessly suffer from preventable blindness. Through Orbis, ophthalmologists and support staff, whom in many instances volunteer, heroically and tirelessly travel throughout the world's poorest countries to give sight to those who are arbitrarily prevented from seeing. Author/Photographer Details: Jarret Schecter was born in New Jersey in 1963. After finishing his education he joined a publishing company in New York, eventually becoming its CEO. The company was sold in 1997 and Schecter turned his attention to photography. His first book, Our World in Focus, a collection of various photographers, was launched at the World Conference on Sustainable Development in Johannesburg in August, 2002. This is his third book, after Hermanovce: Four Season with the Roma, published by Trolley in 2003
ISBN: 1904563414
Publisher: Trolley Books
Hardcover : 144 pages
Language: English
Dimensions: 0 x 0 x 0 inches