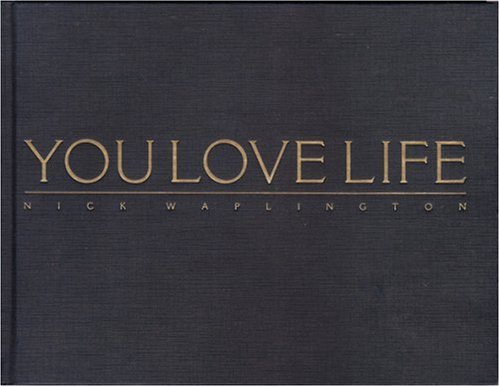 You Love Life
by Nick Waplington
Publisher's Description
'Art flies around truth, but with the definite intention of not getting burnt. Its capacity lies in finding in the dark void a place where the beam of light can be intensely caught, without this having been perceptible before.' - Franz Kafka

If Nick Waplington could photograph Kafka's quote in a single image he would have done so long ago. Waplington's is an exotic and esoteric approach to the photographer's art, as demonstrated by his books, the most recent being 'Learn How To Die The Easy Way,' published by Trolley. They come from the left field, so to speak, and might almost seem absurd without the penetrative curiosity he brings to his work.

For Waplington the truth is largely hidden beneath veneers of innuendo and misrepresentations and so in this, perhaps his most personal work to date, it is no surprise that Kafka provides the theme to 'You Love Life'. For 20 years he has been chasing 'the beam of light' with his camera, mostly in the USA and in Britain, but also in the Far East, throughout Europe, and anywhere else an image that has struck him as a truth could be captured.

Nick Waplington was born Abidjan, Cote D'Ivoire in 1974. Soon after his family emigrated to Czechoslovakia from where Nick made his way to London where he still lives and works.

He is critically acclaimed for such photographic works as Truth or Consequences and Safety in Numbers. The recipient of numerous photographic awards, Waplington was invited by the curator Harald Szeeman to exhibit at the Venice Biennale in 2001.
ISBN: 1904563422
Publisher: Trolley Books
Hardcover : 128 pages
Language: English