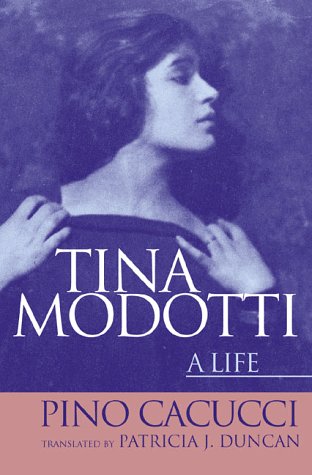 Tina Modotti: A Life
by Patricia J. Duncan
Publisher's Description
The first ever English language translation of Pino Cacucci's 1991 biography explores the life and times of Tina Modotti. Duncan's translation captures the fine balance of Cacucci's text, presenting an adventuresome photographer challenged by doubts and fears while cutting a fearless path.
Amazon.com Review
In 1913 Italian-born Modotti (1896-1943) immigrated to the United States, where she enthusiastically embraced both radical politics and photographer Edward Weston, the first of many prominent men who would love the charismatic artist. Apart from the formally rigorous, socially engaged photographs that made her reputation, Modotti's most ardent passions were for revolutionary Mexico, where she lived from 1922 to 1930, and for Communist activist Julio Mella, whose murder in 1929 engulfed her in the juicy scandal with which Italian journalist Cacucci opens his dishy biography. Modotti spent the 1930s serving the Soviet Union's interests in many of the world's hot spots, notably Spain during its vicious civil war; commitment to Communism gave her a sense of stability her turbulent personal affairs did not. She died mysteriously four years after her return to Mexico, by rumor at the hands of Stalinist poisoners. Cacucci's fascination with abstruse Communist ideological squabbles may not be shared by all readers, and his methodology is decidedly slapdash: he doesn't provide footnotes, and pages of direct dialogue have no discernable source other than the author's imagination. However, his breathless prose certainly conveys the drama of Modotti's short, intense life. --Wendy Smith
ISBN: 0312200366
Publisher: St Martins Pr
Hardcover : 225 pages
Language: English