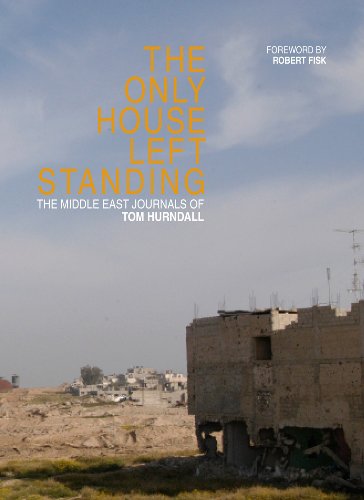 The Only House Left Standing - The Middle East Journals of Tom Hurndall
by Tom Hurndall
Publisher's Description
We follow his journey first from Baghdad, then to Amman and the Al-Rweished refugee camp in Jordan, and finally on to the town of Rafah in Gaza close to the Egyptian border, where US peaceworker Rachel Corrie had been killed just weeks previously.

On April 11th, unarmed and wearing an internationally recognizable orange peacekeeper jacket, he was severely wounded while carrying Palestinian children to safety. He died nine months later in a London hospital.

The book follows Tom’s life and thoughts in the final weeks leading up to the shooting. Motivated by a sense of injustice and striving to remain objective we are drawn into his increasingly serious photographs and words, through extracts from his diary, emails and poems.

It is realised through collaboration with the Hurndall family on the eighth anniversary of that fateful day recent Channel 4 film-documentary ‘The Shooting of Thomas Hurndall’.
ISBN: 1904563511
Publisher: Trolley
Hardcover : 224 pages
Language: English
Dimensions: 7.9 x 10.7 x 0 inches