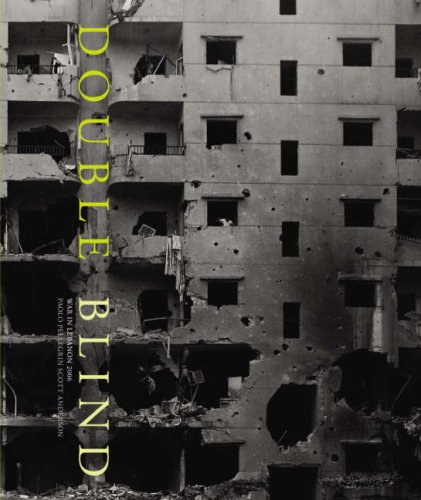 Double Blind: Lebanon Conflict 2006
by Paolo Pellegrin
Publisher's Description
The onslaught in Lebanon during the months of July and August 2006 resulted in not only the deaths of over 600 Lebanese civilians but also an almost complete destruction of the country’s infrastructure: schools, roads, hospitals and homes. In total Hezbollah launched 2500 rockets into Israel, resulting in the deaths of 36 Israeli civilians, and the wounding of hundreds more.

Paolo Pellegrin (Magnum Photos) and journalist Scott Anderson were in Lebanon during the conflict, on assignment for The New York Times. Pellegrin’s photographs intimately capture the fear and powerlessness of the Lebanese population in the face of the ceaseless Israeli air strikes, revealing the terror and despair of families and friends witnessing the deaths of their loved ones, whilst around them their homes were destroyed. In particular Pellegrin also documented the aftermath of the attack on the village of Qana in southern Lebanon; many of the victims children, his photographs reveal the immense suffering of the civilians involved.

Alongside his work exposing the consequences of indiscriminate attacks on a civilian population is a 3000-word account by Scott Anderson, who accompanied Pellegrin in Lebanon. Pellegrin and Anderson were both wounded in a missile attack by an Israeli drone, which fired on their vehicle as they traveled through the city of Tyre. Along with the civilians of southern Lebanon, they were stranded for weeks under heavy bombing and air strikes by the IDF.

The attack at Qana, also the second one to strike the village in living memory, soon after prompted the singer Patti Smith to respond in the form of a song, entitled ‘Qana’, the words and music of which will form her contribution to the book.
ISBN: 1904563570
Publisher: Trolley
Paperback : 90 pages
Language: English
Dimensions: 9.3 x 11 x 0.4 inches