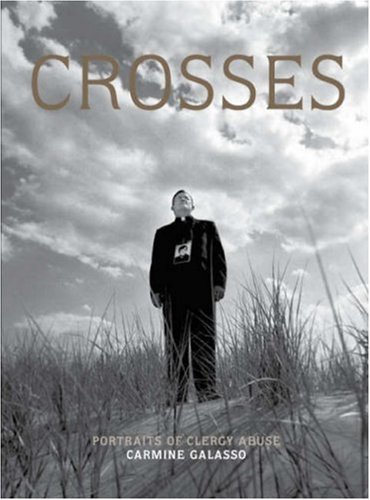 Crosses
by Carmine Galasso
Publisher's Description
“My name is Robert M. Hoatson. I am 53 years old and I am a Catholic priest. I was born February 15, 1952 and raised in West Orange, NJ and I went to Catholic elementary school and Catholic High School and three Catholic Colleges. It was during my late junior year that a Christian Brother approached me and told me that I was going to be moved into his senior honors English class. That Christian Brother later became perhaps the most serial paedophile in the order.”

Accompanying their words are black and white portraits of the survivors today, in places that for them echo where they are now, or where they were then. Each has a different story to tell, a unique pattern of abuse, though they all share certain similarities. A certain grooming by the perpetrator, a blind trust of the parents in this person to look after their child both spiritually and in all ways their welfare, all systematically overruled by the one person who a community put their faith in.

When the sexual abuse would end, then the self-abuse would often start. Drugs, alcohol, violence. Many went to jail for their crimes, this as a direct result of a much worse one that they had been too young to realise. Others, including two cases in the book, committed suicide.

Two prominent writers have contributed, an introduction by A.W. Richard Sipe, a psychotherapist and former Benedictine monk and priest now married to a former Maryknoll nun. Well-known in this community, he has written several books, and counts as a speciality, the exploration of priestly celibacy. Michael Kelly is an award winning newspaper journalist and author, who writes focusing not on the overall clergy sexual abuse problem in the Church, but narrows it down to the individual, the person who is hurt for life.
ISBN: 1904563597
Publisher: Trolley Books
Hardcover : 200 pages
Language: English
Dimensions: 7.1 x 9.1 x 0.7 inches