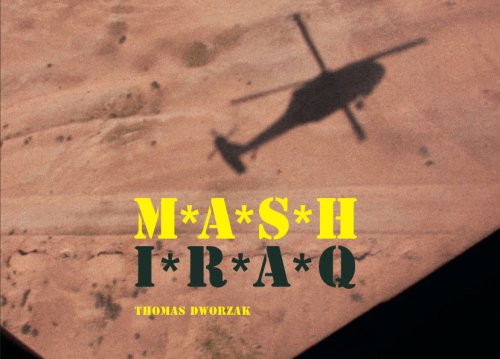 M*a*s*h I*r*a*q
by Thomas Dworzak
Publisher's Description
First seen in the early 1970’s at the height of anti-Vietnam feeling in America, the original series M*A*S*H followed a hapless US medical corps stationed out in the preceding Korean war. Here underlay a dark commentary throughout its comedy. As the US Military continue to fight onwards in Iraq, doctors, nurses and medics are working on the front lines to keep their casualties down. Magnum Photographer Thomas Dworzak was with them, embedded with the 44th Medcoms 50th and 1150th Medical Companies in Iraq over several periods in 2005.

Taking the lead from the satirical commentary first provided by the film and subsequent series of M*A*S*H, this book juxtaposes images from the series with Dworzak’s own from his time with the medical companies he was stationed with out in Iraq.

From mess tents to surgical tables, the story of everyday life behind the scenes of these medical corps shows at times a pathos and comradeship alongside the expected blood and suffering. The accompanying stills and subtitled images from M*A*S*H bring Dworzak’s photographs out of the realm of the purely photojournalistic, and instead poignantly provide a black humour for a disenchanted audience of the modern world, and a comment on the concept of photographers today working embedded and alongside the military.
ISBN: 1904563600
Publisher: Trolley Books
Paperback : 96 pages
Language: English
Dimensions: 11.7 x 8.3 x 0.7 inches