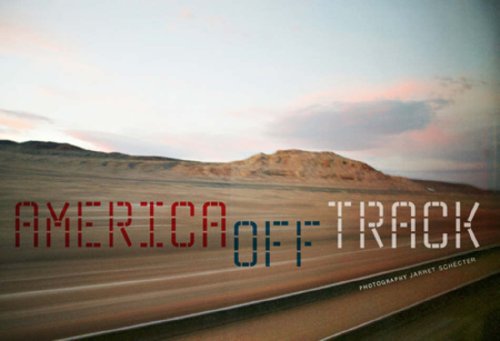 America Off Track
by Jarret Schecter
Publisher's Description
'I decided to take my camera for weeks at a time, over the course of two years, aboard Amtrak, the US passenger rail system. I wanted to show the rich, the poor, and other dynamically integrated opposites, paradoxes, which are the visual embodiments of the US.'

Traveling continuously from one American train station to another, Jarret Schecter photographed the views from his cabin window. The monotony of his travel was constant but his view was as varied as each of his destinations. Whether in coach or the sleeping cabin, the train window framed the conflicting realities that surround those living in America. The land that declares itself the innovative leader of the free world, upon closer examination, also appeared to be a vast place of melancholy and emptiness.

'Dilapidated and sometimes dangerous, old bustling city centers, places seemingly isolated to business activity, appeared eerily quiet, especially after five. In smaller communities, there were often no sidewalks and people seemed to be confined to their cars, destined for generic strip malls with plenty of parking at the edge of town. Between communities, there was often a string of ordinary-looking, indistinguishable townships, or frequently just vast nothingness, one telephone pole after the other.'

Amtrak, the national rail service of the US, is not the salubrious modern flagship of the country's engineering and technology prowess. In fact the opposite, it has been left to languish, underfunded and underused, the high-speed 'Bullet' trains of Japan and similarly the TGV's of Europe but a distant dream. Journeys are long and without luxury, and similarly Schecter's trip, like the inefficient Amtrak train on the verge of bankruptcy, reflected a US that appeared uncannily impoverished.
ISBN: 1904563651
Publisher: Trolley Books
Hardcover : 128 pages
Language: English
Dimensions: 0 x 0 x 0 inches