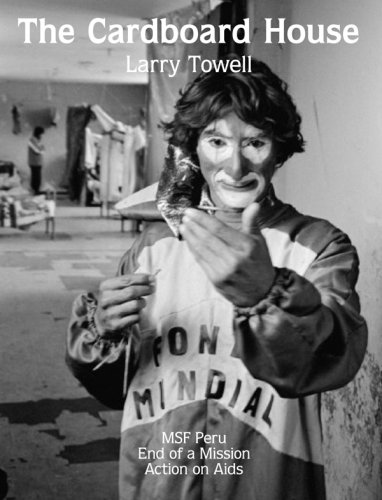 The Cardboard House: Msf Peru -- 25 Years on AIDS
by Larry Towell
Publisher's Description
Medecins Sans Frontieres (MSF) is an international humanitarian organization, committed to providing medical assistance to populations in danger and to raising awareness of the plight of the people they help. Today MSF is active in more than 60 countries in the world. MSF has been working in Peru since 1985.

In Peru, the prevalence of HIV/AIDS is low, but highest amongst the most neglected members of society there, mainly homosexual sex between men and commercial sex workers. Since 2004, MSF has offered HIV/AIDS care in the slum of Villa El Salvador, Lima.

In Lima, MSF has been working in Lurigancho, one of the most populated prisons of Latin America. In this prison the risk of contracting HIV/AIDS is 5 to 7 times higher than in the rest of the country.

At the end of 2007 MSF handed over all Peruvian projects to local authorities, leaving the country after almost 25 years.

Larry Towell (Magnum Photos) was commissioned by MSF to travel to the prison and the slums in Lima to photograph the result of MSF’s 25-year presence, and show that the area is now ready to continue its fight against HIV and AIDS on its own. Most of these pictures were taken in the week and a half culminating on International AIDS Day, 2007.

Towell brings us black and white images of people shunned by society and desperate through poverty, their situation exacerbated through the endemic HIV and AIDS in their already marginalised population. MSF has targeted their cause specifically since the mid 1990s.

This book is a celebration of their work and the people whose existence they have salvaged.

'If there's one theme that connects all my work, I think it's that of land-lessness; how land makes people into who they are and what happens to them when they lose it and thus lose their identities.'