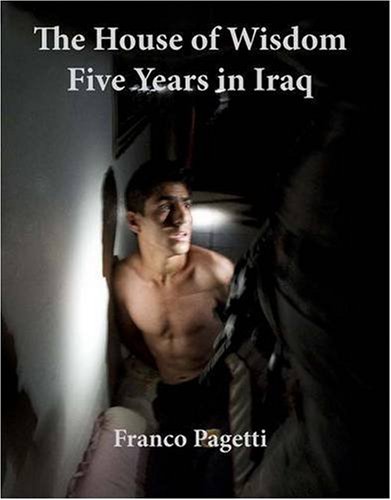 The House of Wisdom: Five Years in Iraq
by Franco Pagetti
Publisher's Description
In January 2003 Franco Pagetti went to Baghdad. Three months later he was photographing the city through the fall of Saddam, capturing a population in the throws of released dictatorship, always more interested in the Iraqi destiny than that of the US war machine churning its way through the city.

But it soon became increasingly difficult for foreign journalists to stay and work. By the end of 2003 the insurgency had developed rapidly. The first targets the US military, with roadside bombs and ambushes, soon after any foreigner was in danger. Many journalists retreated from the country.

Pagetti however stayed, he found a way to carry on working although it was becoming more treacherous than ever. Committed to his cause of documenting the unfolding story of Iraq and its people, four years later he was still there, in a country that had descended into a desperate and bloody civil war. Now, no one is safe, innocent civilians killed for being in the wrong place at the wrong time, caught in the middle of the Shiite-Sunni conflict.

Pagetti’s only hope to continue his determined quest was to work embedded with the US military, and find ways of slipping through the cracks to document the reality of the Iraqi dream that became a living nightmare. Whilst embedded he also captured the face of war at the frontline, the events at Fallujah in 2004, and the innumerable operations against both Sunni and Shia.

2008 will herald the fifth year of a further evolving and complex situation. Pagetti will be there, his images showing a unique presence and a steadfast dedication to follow the unfolding, and uncertain, future of a country torn.

Franco Pagetti is the most recent member of the respected VII agency, joining in November 2007. He has emerged as one of the principal chroniclers of the Iraq war, his photographs appearing in Stern, Le Figaro and most notably in TIME Magazine, are the definitive images of the most important news story of our time.

His images have captured the horrors of war, the brief flowering of hope after the downfall of Saddam Hussein, the rise of insurgent and terrorist groups, and more recently, the inexorable descent into a bloody sectarian civil war.

“The most inspirational thing about Franco is his determination... He has been committed to this story, as a witness to history. He has developed a distinctive visual style that is very much his own, and sets him apart from the other photojournalists who cover this conflict.” Alice Gabriner, Photo Editor, TIME Magazine.
ISBN: 1904563732
Publisher: Trolley
Hardcover : 196 pages
Language: English
Dimensions: 0 x 0 x 0 inches