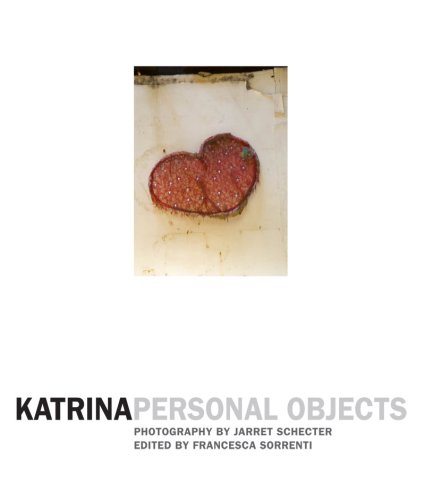 Katrina Personal Ojects
by Jarret Schecter
Publisher's Description
Katrina, a natural hurricane, struck New Orleans on August 29th 2005. Nobody envisaged the damage and destruction it would wreak on the southern US city, and it became on a much greater scale a manmade disaster of civil engineering and social discrimination. Because of government failure, millions viewed political ineptitude, social inequity and an unpaved America where the streets were lined with anything but gold. The images in this book show the abandoned and hardest-hit district of the Lower Ninth Ward, now over two years later and counting.Still vacant and dilapidated, it is a shadow of its former self. However, in those seemingly lifeless shadows, and through the broken windows of empty houses, one can eerily see the ghostly reflections of life and death in the form of personal objects. These intensely personal items have been abandoned and left and, in most cases, will never be reclaimed. This small format book touches on the ephemeral, and surprisingly often beautiful, remnants of belongings that once made up the memories and precious moments of peoples' lives.
ISBN: 1904563767
Publisher: Trolley
Paperback : 50 pages
Language: English
Dimensions: 6.9 x 8.4 x 0 inches