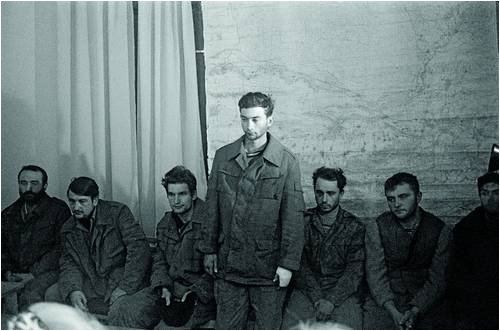 Off Broadway is an area of New York where traditionally alternative theatre was born and established itself. A new, different and more anti-conventional way of describing reality was born in its cellars in recent decades. Off Broadway is also a place where the six young photographers of Magnum got together - Christopher Anderson, Antoine D'Agata, Thomas Dworzak, Alex Majoli, Paolo Pellegrin, Ilkka Uimonen - each of them seeking to tell the story of their reality in a different way, Off Broadway is the first moment the six photographers decided to gather their efforts, to mix their views together and organise an exhibition which, for the first time, reflected this new photographic vision. It was a different exhibition in its approach and content, with war reportage photos from Iraq, Palestine and Afghanistan to Chechnya, Ethiopa and Kosovo, seen alongside other images and fragments collected from around the world. The exhibition was first shown in New York in the 60 Mercer Gallery, and since at Rencontres d'Arles festival, France, the Leica and Rheinland-pfalz, Berlin, and he Padiglione d'Arte Contemporanea, Milan. With over 100 photos gathered from the inaugural New York exhibition, this new compilation features a CD musical accompaniment by the renowned Italian musician Fabio Barovero.
ISBN: 1904563805
Publisher: Trolley
Paperback : 80 pages
Language: English
Dimensions: 0 x 0 x 0 inches