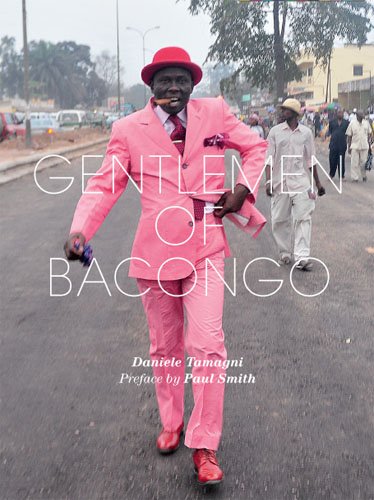 Gentlemen of Bacongo
by Daniele Tamagni
Publisher's Description
Now in its second printing.

The arrival of the French and Belgians to the Congo, at the beginning of the 20th Century, brought along the myth of Parisian elegance among the Congolese youth working for the colonialists. In 1922, G. A. Matsoua was the first-ever Congolese to return from Paris fully clad as an authentic French gentleman, which caused great uproar and much admiration amongst his fellow countrymen. He was the first Grand Sapeur. The Sapeurs today belong to 'Le SAPE' (Societe des Smbianceurs et des PErsonnes Elegantes) - one of the world's most exclusive clubs. MEmebers have their own code of honour, codes of professional conduct and strict notions of morality. It is a world within a world within a city. Respected and admired in their communities, today's sapeurs see themselves as artists. Each one has his own repertoire of gestures that distinguishes him from the others. They are also after their own great dream: to travel to Paris and return to Bacongo as lords of elegance. Designer brands of suit and accessories are of the utmost importance to Sapeurs - Pierre Cardin, Roberto Cavalli, Dior, Fendi, Gaultier, Gucci, Issy Miyake, Prada, Yves Saint Laurent, Versace, Yohji Yamamoto - are their patron saints. Unlike some US hip-hop gangs who are dressed in similar fine threads, there is no bloodshed here - here your clothes do all the fighting for you. otherwise you are not fit to be called a Sapeur.
ISBN: 190456383X
Publisher: Trolley
Hardcover : 224 pages
Language: English
Dimensions: 6.3 x 8.1 x 1.1 inches