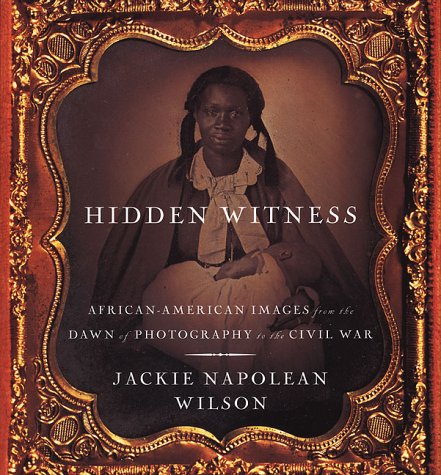 Hidden Witness: African American Images from the Dawn of Photography to the Civil War
by Jackie Napolean Wilson
Publisher's Description
Painstakingly researched, this anthology presents an impressive number of photographs of African-Americans during the era of slavery. Few images were made, even fewer remain, but the impact of witnessing slavery directly through photographs is haunting.
Amazon.com Review
The image is striking: A woman gazes serenely at the camera, baby cradled in her arms in classic Madonna-and-child pose. More striking is the fact that the sitters are black, and the photograph dates from 1860. Few photographs from the mid-19th century feature African Americans, enslaved or free. Those that do are often staged and reflect the biases of the photographer or the printmaker who published them. Others, however, provide glimpses of daily life before the abolition of slavery.

Renowned collector of early photographs Jackie Napolean Wilson has compiled 70 such images in Hidden Witness. Each photograph--whether an outdoor scene, where slaves are afterthoughts in the frame, so-called Mammy portraits of slaves holding white children, studio portraits of proud freemen and women--is accompanied by a brief explanation, contextualizing the image and speculating on the nature of the pictured relationships. Some of the subjects are famous, such as Abraham Lincoln and Frederick Douglass; others, though unknowns, carry a force of their own: the exuberant grin of the prizewinning boxer, the proud stance of a Union soldier, the quiet dignity of a slave nurse. A handsome addition to the history of African Americans and photography. --Sunny Delaney