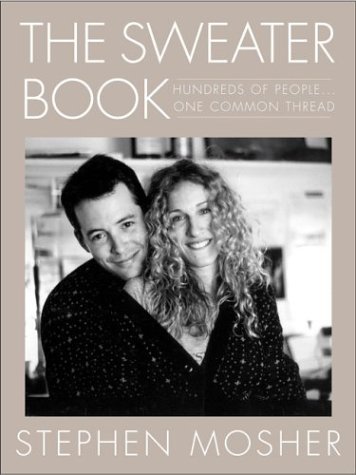 The Sweater Book: Hundreds of People...One Common Thread
by Stephen Mosher
Publisher's Description
A decade in the making, The Sweater Book is a fascinating study in personality. By asking his subjects to put on the same cardigan sweater and seeing how they choose to wear it, Mosher was able to capture on film a most remarkable phenomenon - when given a common item with which to express themselves, each person's distinctive personality came shining through, and the sweater becomes a symbol of what each considers to be most unique about themselves. The resulting collection of over 500 stunning black-and-white photographs proves to be a touching and exhilarating ride from New York to Dallas, from Hollywood to London, as Mosher explores the creativity of celebrities and humbles alike - in their homes and workplaces, with their families and pets, in any way they chose. The people featured includes top names from the world of theater, film, TV, fashion, music, dance, and literature, such as Michael Bolton, Dominick Dunne, Matthew Broderick, Ted Danson, Tim Allen, Noah Wyle, Quentin Crisp, Josh Hartnett, Ryan Phillipe, and many more. See Sarah Michelle Gellar on the set of Buffy The Vampire Slayer before the first episode aired. See Swoosie Kurtz and Chris Meloni show some skin. See Jason Alexander re-enacting the behavior of his newborn child. See Jenna Elfman jumping for joy and Sela Ward snuggling her sibling. You will be amazed at how many different ways this one sweater can be worn!
ISBN: 0312311664
Publisher: Thomas Dunne Books
Hardcover : 224 pages
Language: English