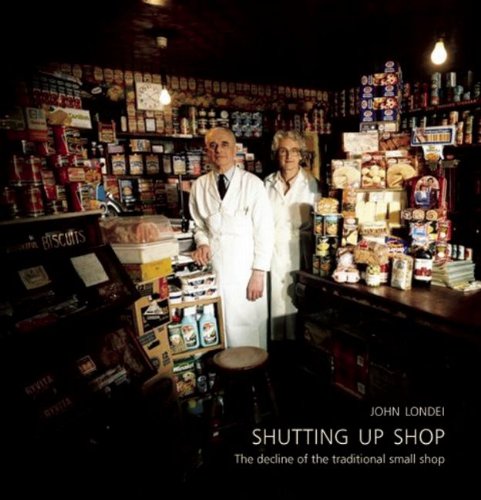 In all there are 60 shops. Each one is unique, and their range diverse: from flowers to condoms, from tea to tobacco. As well as shops from London the series covers many regions of the UK, everywhere from the Isle of Harris to the Isle of Wight.

As well as the photographs of the shops are their stories, vividly told through anecdote and interviews with the staff; for just as important as the shops were the shopkeepers, people who were cherished and seen as important members of their community. And how proud they were to be serving it!

In 2004 Londei began the task of updating what had become of the shopkeepers and shops he’d photographed so long ago. His findings are included in the fascinating ‘afterword’ section of the book. Many had closed not long after the pictures were taken, others struggled on until the death or retirement of their owners; almost every single one had changed beyond recognition.
ISBN: 1904587461
Publisher: Dewi Lewis Publishing
Hardcover : 144 pages
Language: English
Dimensions: 10.2 x 10.5 x 0.8 inches