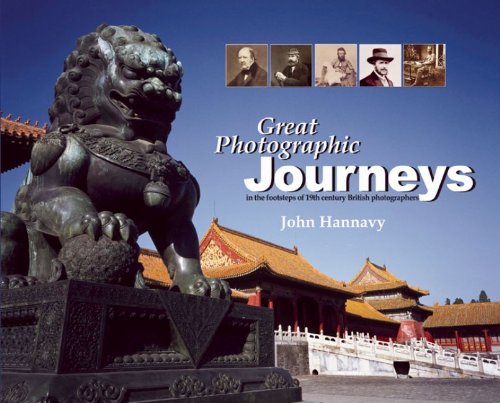 Great Photographic Journeys: in the footsteps of 19th century British photographers
by John Hannavy
Publisher's Description
One hundred and fifty years ago travelling with a camera was both a novelty and an enormous challenge. The intrepid photographers who took their cameras to remote corners of the world brought back images which amazed their peers.

Photographer and historian John Hannavy has recreated some of their epic journeys – travelling to Scotland along the route followed by William Henry Fox Talbot in 1844; recreating Charles Kinnear and Thomas Melville Raven’s 1857 journeys to France; exploring the Nile from Cairo to Abu Simbel along the route Francis Frith followed between 1856 and 1859; travelling through Russia and the Ukraine as Roger Fenton did in 1852 and 1855; across India from Calcutta to Simla following Samuel Bourne’s 1863 account of his travels; and exploring China and Cyprus as John Thomson did between 1863 and 1878.

This beautifully illustrated book contrasts the Victorian world with our own, and looks at how our view of the world has changed in the intervening years. It chronicles the developments which have taken place in travel, architecture, culture, and of course photography itself.
ISBN: 1904587542
Publisher: Dewi Lewis Publishing
Hardcover : 256 pages
Language: English
Dimensions: 0 x 0 x 0 inches