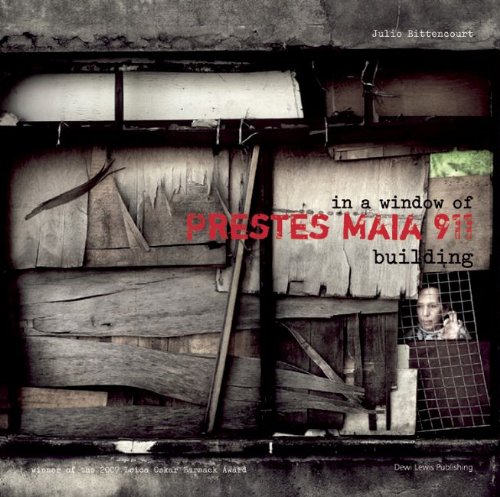 In a Window of Prestes Maia 911 Building
by Julio Bittencourt
Publisher's Description
In March 2006 the residents of 911 Prestes Maia, a 22 storey ramshackle tower block in the centre of sprawling São Paulo, Brazil, were surprised to learn that they were to be evicted within 28 days. Whilst the building, neglected by its landlord, had apparently been empty for over a decade 1,630 people, including some 468 families with 315 children lived there. In 2003 the ‘Movement of the Homeless’ had moved in hundreds of homeless families. The new residents drove out the vermin and the drug dealers, and cleaned up the place, and the building became possibly the largest squat in the world, complete with a library, workshops and other educational activities.

Bittencourt’s photographs are a powerful record of this diverse community. Photographing from the adjacent building, Bittencourt records the tower’s residents as they appear in weathered window frames. According to him, in a mega-city like São Paulo, where large buildings are packed together cheek by jowl, families and friends often communicate with each other through windows.
ISBN: 1904587674
Publisher: Dewi Lewis Publishing
Hardcover : 80 pages
Language: English
Dimensions: 11.3 x 11.1 x 0.5 inches