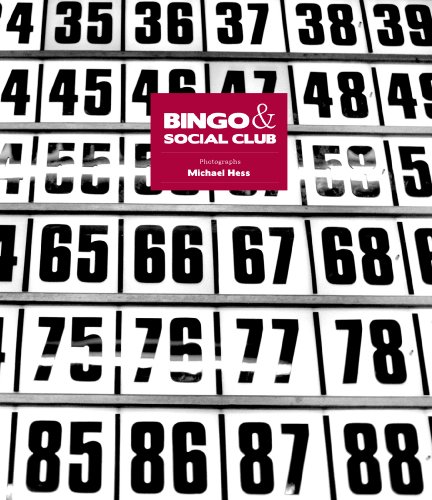 Bingo & Social Club
by Michael Hess
Publisher's Description
Around 1pm, every day of the week, nearly 600 bingo halls across the UK open their doors to thousands of loyal customers. But, although they can be found on almost every British high street, surprisingly few people ever see what goes on inside.

In Bingo & Social Club, photographer Michael Hess opens up this world to a new audience. Behind the often-crumbling exteriors, he finds vibrant places full of strong characters, quirky details and more than a hint of nostalgia. In his own words: “I want people to feel that they’ve spent a night at the bingo – to sense what it feels like to be there.”

Michael Hess and Maxine Gallagher spent many nights in the clubs, playing bingo, chatting with the managers and customers, and collecting stories from the people they met. They wanted to find out who these people really were. “Bingo halls are not just about gambling; they’re about human beings. They really do act as social hubs for many communities.”

Jack, the manager of a bingo club in Newcastle, forms the backbone of the book.“He’s quite a character – tough and yet extremely dignified – and I knew straight away he could add the extra dimension I was looking for.”
ISBN: 190458795X
Publisher: Dewi Lewis Publishing
Hardcover : 112 pages
Language: English