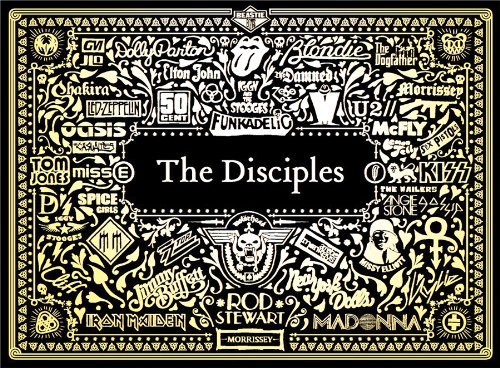 James Mollison: The Disciples
by James Mollison
Publisher's Description
Between 2004 and 2007, James Mollison attended pop concerts across Europe and the USA with a mobile photography studio, inviting fans of each music star or band to pose for their portrait outside the gig. He subsequently combined portraits of 8-10 fans for each performer into a single line up, making a single panoramic image in each case. With a total over 500 individual portraits, in 58 panoramic images, The Disciples, an original, sharp and highly entertaining take on contemporary music culture and the tribalism invoked by popular music stars.

With a foreword by Desmond Morris, ethologist, writer and broadcaster (whose previous books include The Naked Ape, 1967), The Disciples also features a commentary by Mollison on his encounter with the fans of each star. The book is exquisitely designed and produced on a large portfolio scale (each image featured appears at 70cm/28in wide), and is published in a limited edition of 3000 copies.
ISBN: 190571212X
Publisher: Chris Boot
Hardcover : 128 pages
Language: English
Dimensions: 14.5 x 10.5 x 0 inches