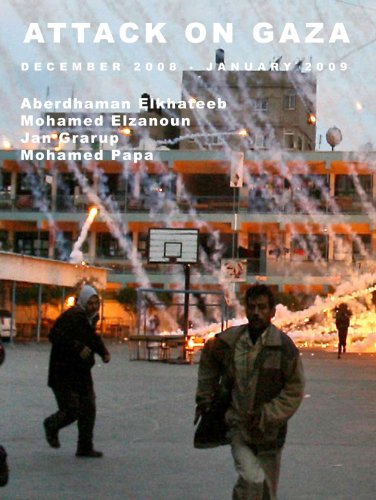 Attack on Gaza
by MOHAMMED ABED
Publisher's Description
On Saturday December 27th 2008 the Israeli army launched a sudden attack on Gaza. It was in contrast to the attack on Lebanon in August 2006, which by comparison was judged to be badly planned and unsuccessful; its objectives to bring Hamas to submission for their rocket launches over the past eight years into Israel. After its own foreign minister said that Israel's army had been allowed to 'go wild' there, the sense of morality that should accompany conflict and violence seems to have been lost.

Here we get a visual feeling of what it means for a school, sheltering civilians, to be subjected to white phosphorous bombs - a rain of inextinguishable fire balls falling from the sky in all directions, deliberately designed to cause maximum death and destruction. During the two month-long siege the international media was denied access to cover the true extent of the escalating attack, and so it was left to Palestinian photographers within the territory, and Jan Grarup, a respected Danish photojournalist. Even these images found little exposure to the outside world. The BBC for the first time controversially blocked an appeal by the Disasters Emergency Committee for aid.

Jan Grarup, Mohamed Elzanoun, Aberdhaman Elkhateeb and Mohamed Papa captured the images that nobody wanted to show, and that Israel tried to censor. On one side the view of a European, on the other three Palestinian photographers. Two points of view, one reality of brutal attack to innocent civilians, Aid Agencies and the Press.
ISBN: 1907112006
Publisher: Trolley
Paperback : 160 pages
Language: English
Dimensions: 0 x 0 x 0 inches