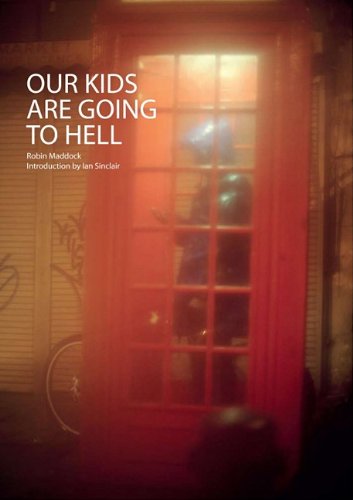 Our Kids Are Going to Hell
by Robin Maddock
Publisher's Description
Robin Maddock spent three years accompanying police going about their work in east London. His photographs of various raids uncover a seedy narrative, how a dangerous myth of success without education had grown over the last twenty years within our youth. It is now aspirational to be violent, vain and most dangerously, uneducated.

In 2007 a UNICEF study of child well-being in 21 industrialized countries placed Britain firmly at the bottom of the table. Yet we don't need to be told something is wrong with our young around us. These images show an endless cycle of raids and arrests that don't even make the local newspapers; as such the scenes evoke a sense of the everyday, the mundane daily grind of a redesigned and well-played ritual. Drugs are the most prized aspect of the raid, valued equally by both sides, they become visible through confrontations, weapons and a tide of visitors to the house of the mother.

Iain Sinclair, the esteemed writer on the history of London, who lives in Hackney where these images are taken, provides the introduction to the book. Robin Maddock is a young British photographer living and working in London. In 2008 he was a finalist at the Descubrimientos at Photoespana. This is his first book.
ISBN: 1907112022
Publisher: Trolley
Paperback : 140 pages
Language: English
Dimensions: 6.9 x 9.8 x 0.6 inches