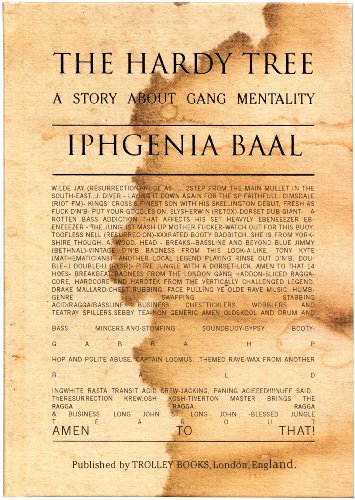 The Hardy Tree
by Iphgenia Baal
Publisher's Description
It is 1864, St Pancras is a sprawling cemetery-slum, housing London’s teeming dead, dying and decrepit in their thousands. With the advent of the Great Midland railway line running from Manchester to London’s newest station, 10,000 bodies must be disinterred and, by order of the church, reburied on consecrated soil.

Charged with the exhumation are The Resurrection Men, a gang of thugs for whom the dead are no more sacred than the ground they break, and at their head, the young Thomas Hardy – architectural apprentice and callow idealist. We follow the fledgling writer as he struggles to reconcile the job at hand, the brute reality of the rotting dead, the rapid onset of modernity and his own wavering belief.

As the corpses mount in rising piles, Hardy endeavors to retain these lost identities – cataloguing and collecting stories and ephemera from the opened graves. But as the bodies moulder and disintegrate, so too Hardy begins to lose his sense of self.

Now, 130 years later – as the Eurostar approaches its terminus – an oddly similar drama is playing out: One with its roots in the past, but its head nowhere in particular.
ISBN: 1907112294
Publisher: Trolley Books
Hardcover : 64 pages
Language: English
Dimensions: 0 x 0 x 0 inches