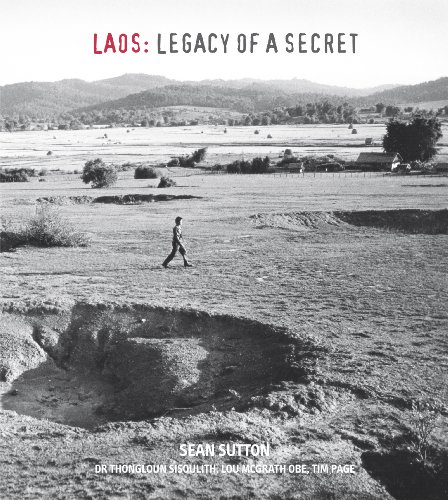 LAOS: LEGACY OF A SECRET
by Sean Sutton
Publisher's Description
Between 1964 and 1973, during the war with the United States, the North Vietnamese used a network of supply lines, known as the Ho Chi Minh Trail, running from North Vietnam through the jungles and mountains of neighbouring Laos and Cambodia. In an effort to staunch the flow of troops and weapons the U.S. dropped more than 2 million tons of bombs on Laos, including more than 270 million cluster bomb submunitions. Kept secret from Congress and the American people, full details of the scale of the bombing sorties only becoming declassified in the 1990s.

By the time the aerial campaign ended in 1973 more bombs had been dropped on Laos, since renamed Lao People’s Democratic Republic (LPDR), than the Allies dropped on Germany and Japan combined during World War II. Many failed to explode, leaving the landscape littered with hundreds of thousands, perhaps even millions, of unexploded bombs, as lethal today as when they fell from the sky over three decades ago. Dubbed ‘bombies’ by Laotian villagers, these often brightly coloured cluster bomb submunitions are still found in the clefts of bamboo branches, by children playing in shallow dirt, or in the fields where farmers till the soil by striking the earth with a hoe.

Since 1974 more than 20,000 people, many of them children, have been killed or injured by bombs or other unexploded ordnance in Lao PDR. Today, the lives of about 300 Laotian people are still devastated each year by the deadly remnants of this war.