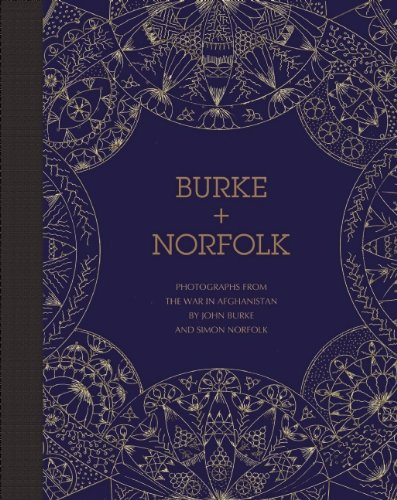 Burke + Norfolk: PHOTOGRAPHS FROM THE WAR IN AFGHANISTAN BY JOHN BURKE AND SIMON NORFOLK
by Simon Norfolk
Publisher's Description
Simon Norfolk’s 2002 book Afghanistan: chronotopia is now recognised as a classic of photography. It established Norfolk’s reputation as one of the leading photographers in the world and the work has been exhibited at more than thirty venues worldwide.

In 2010 Simon Norfolk returned to Afghanistan. This time he followed in the footsteps of the 19th century Irish photographer John Burke, a superb, yet virtually unknown, war photographer. Burke’s eloquent and beautiful photographs of the Second Anglo-Afghan War (1878-1880) provide an extraordinary record. Using unwieldy wet-plate collodion negatives and huge wooden cameras he shot landscapes, battle-fields, archaeological sites, street scenes, portraits of British officers and ethnological group portraits of Afghans in what amounts to a richly detailed record of an Imperial encounter. The range is tremendously broad, yet suffused with a delicate humanism. These are also the first ever pictures made in Afghanistan. With this book, one hundred and thirty years too late, John Burke’s time has come at last.

Norfolk’s new work looks at what happens when you add half a trillion US war dollars to an impoverished and broken country such as Afghanistan. Very loosely re-photographic in nature, the work is presented as an artistic collaboration between Burke and Norfolk. It features photographs by Burke never before published, as well as Norfolk’s new pictures from Kabul and Helmand.

Simon Norfolk has received innumerable awards including The European Publishers Award for Photography, The Olivier Rebbot Award (Foreign Press Club of America), and The Infinity Award (ICP, New York). His work is in major public and private collections throughout the world. His most recent exhibition, in March 2011, was shown at the Queen’s Palace in the Bagh-e Babur garden in Kabul. Supported by The World Collections Programme and the Aga Khan Trust for Culture, it incorporated both Norfolk and Burke’s photographs alongside work resulting from a series of workshops by Simon Norfolk with Afghan photographers.