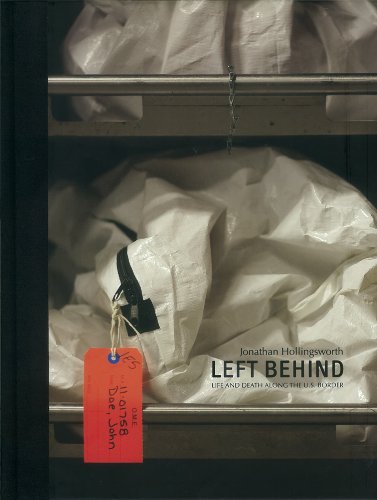 LEFT BEHIND. Life and Death Along the US Border
by Jonathan Hollingsworth
Publisher's Description
Every year since 2001 no less than 150 sets of the decomposed or skeletal remains of people crossing into the US from Mexico have been discovered in remote areas of Arizona’s Sonoran Desert. Pima County Forensic Science Center in Tucson deals with most of them, analyzing and storing their remains, archiving their possessions — and hopefully — determining their identities.

In Left Behind, documentary photographer Jonathan Hollingsworth delivers a sobering look at those who do not survive the Arizona border crossing and the personal effects that they leave behind. The work takes the viewer on a journey through the day-to-day operations of the forensic science center, as well as into its archive of personal effects of the border crossers. Hollingsworth also travelled to Nogales (site of one of the largest border patrol stations in the United States), and to Green Valley, Arizona where he discovered belongings left on the desert floor by migrants awaiting road-side pick-up in the dead of night.

“The work is a way of humanizing the immigration issue we face in the United States. It points to how desperate these individuals are to escape and start a new life. Essentially this book stands as a memorial to people who died alone, without ceremony and who are often still unknown.”