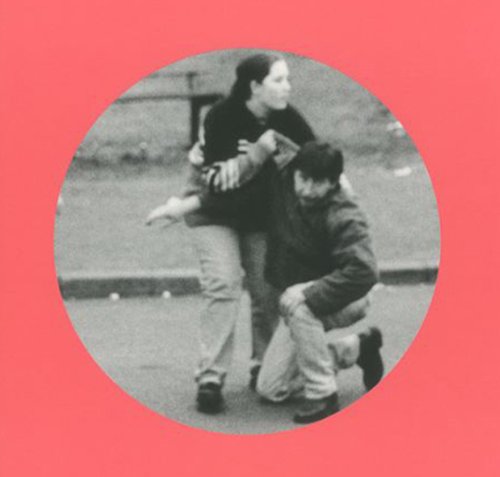 The Belfast Exposed Archive occupies a small room on the first floor at 23 Donegal Street and contains over 14,000 black-and-white contact sheets, documenting the Troubles in Northern Ireland. These are photographs taken by professional photo-journalists and 'civilian' photographers, chronicling protests, funerals and acts of terrorism as well as the more ordinary stuff of life: drinking tea; kissing girls; watching trains.

Belfast Exposed was founded in 1983 as a response to concern over the careful control of images depicting British military activity during the Troubles. Whenever an image in this archive was chosen, approved or selected, a blue, red or yellow dot was placed on the surface of the contact sheet as a marker. The position of the dots provided us with a code; a set of instructions for how to frame the photographs in this book. Each of the circular photographs shown on the previous pages reveals the area beneath these circular stickers; the part of each image that has been obscured from view the moment it was selected. Each of these fragments – composed by the random gesture of the archivist - offers up a self-contained universe all of its own; a small moment of desire or frustration or thwarted communication that is re-animated here after many years in darkness.

The marks on the surface of the contact strips – across the image itself – allude to the presence of many visitors. These include successive archivists, who have ordered, catalogued and re-catalogued this jumble of images. For many years the archive was also made available to members of the public, and sometimes they would deface their own image with a marker pen, ink or scissors. So, in addition to the marks made by generations of archivists, photo editors, legal aides and activists, the traces of these very personal obliterations are also visible. They are the gestures of those who wished to remain anonymous.

Adam Broomberg and Oliver Chanarin have been collaborating for over a decade. They have produced six books which in different ways examine the language of documentary photography; TRUST (2000) accompanied their first solo-show at The Hasselblad Center; GHETTO (2003) a collection of their work as editors and principal photographers of Colors magazine, was exhibited at the Victoria & Albert Museum; MR. MKHIZE'S PORTRAIT (2004) documented South Africa ten years after apartheid and accompanied a solo show at The Photographer's Gallery; CHICAGO (2006), an exploration of contemporary Israel was published by SteidlMACK in conjunction with a solo-show at The Stedelijk Museum; FIG. was published in Autumn 2007, by Steidl & Photoworks, to accompany solo exhibitions at the John Hansard Gallery and Impressions Gallery, UK. THE RED HOUSE (2007), produced in the solitary confinement cells hidden below the Ba'athist Party headquarters in Iraq, is published by Steidl Editions. Broomberg and Chanarin regularly teach workshops and give master classes in photography, as well as teaching on the MA in Documentary Photography at LCC in London and the MFA at the School of Visual Arts in New York. They are the recipients of numerous awards, including the Vic Odden Award from the Royal Photographic Society, and are members of the board of trustees for Photoworks and The Photographers' Gallery.
ISBN: 1907946047
Publisher: Mack
Hardcover : 416 pages
Language: English
Dimensions: 0 x 0 x 0 inches